We’re in a really odd time right now in the Jewish calendar.

Between Pesach and Shavuos is a what’s known as the counting of the Omer. For 49 days we count each day in ascending order until we reach Shavous. This is symbolic of the 49 days the Jews traveled until they reached Mt. Sinai. And much like our ancestors, we are supposed to be climbing in spirituality until we are ready to receive the Torah ourselves. Basically, it’s a great time to reflect on our character traits. But in the midst of this counting are several lesser known events and holidays, particularly within the week we happen to be in (week 5). And they’re all connected in a fascinating way.

First off, I want to go a little bit deeper into the Omer. These 49 days are comprised of 7 weeks. Our Kabbalistic tradition says that each week has a spiritual character trait associated with it. The order is Chessed (loving kindness), Gevurah (strength/judgment), Teferes (harmony/beauty), Netzack (endurance), Hod (grace), Yesod (foundation), and Malchus (kingship, mastery). So the whole first week deals with Chessed. But then on top of that each day of the week cycles through those same traits. So the first day would be Chessed within the aspect of Chessed. The second day would be Chessed through the aspect of Gevurah, and the third would be Teferes of Chessed. Get the idea? Each day has a unique character trait that we are supposed to focus on. This whole Kabbilistic process is known as Sefiras HaOmer.

We happen to be in the middle of the 5th week. The week of Hod. What’s Hod? Above I said it was grace. But what does that really mean? If you Google it, you’ll end up with this.

Two seemingly disconnected definitions. But the Jewish understanding gives us the connection. But before I get there, I’m going to take you on a little journey.

Wednesday was the lesser known holiday known as Pesach Sheni. During the 2nd year the Jews were in the desert and it came time to observe Passover again. They celebrated and made the korban sacrifice (you know, the thing that they used to paint the blood on the door). But in order to make the korban sacrifice you had to be ritually pure. However, a few individuals weren’t. So they went up to Moses and said, “Hey we want to do the korban! Can we have another chance?” And Moses said, “Sure.” So a month later they were allowed to make the sacrifice on the 14th of Iyyar. Which happens to be the 29th day of he Omer.

But the korban sacrifice is a time bound mitzvah. And it’s a big deal. There’s a specific window of opportunity and these guys missed their shot. That’d be like voting after an election. The vote already happened, the winner has been declared. You missed your chance. Why were these Jews allowed to make the sacrifice a month later? Why does God allow it?

A little more than the first half of the Omer is considered a period of mourning. You’re supposed to avoid live music, weddings, and shaving. Why? A bunch of Rabbi Akiva’s students died. 24,000 of them during this period. But on the 33rd day of the Omer, the dying stopped. So we celebrate that day. After that, we get to go back to listening to music, shaving, etc. Lag B’Omer is the 33rd day of the Omer. This year it’s on Sunday.

Virtually all of this 49 day period is contained in parshas Beshalach, from the book of Exodus. It starts with the splitting of the Sea of Reeds, then the Jews run out of water, then food, and eventually the complain to Moses that they should have stayed in Egypt.

“It was the fifteenth day of the second month after they went out of the land of Egypt. The entire community of the B’nei Yisrael complained against Moses and Aharon in the desert. ‘If only we had died by the hand of God in the land of Egypt…’
God said to Moses, ‘Behold, I will make bread rain from heaven for you and the people shall go out and gather enough for each day…” (Shemos 15: 1-4)

The Jews complain so much that they start to romanticize their slavery in Egypt. What do they get for their complaining? The manna. A bread from God that falls from the sky, tastes great, is less filling, basically the best stuff on earth (actually heaven). When is the 15th day of the 2nd month? The 15th of Iyyar, the day this blog post is being posted and the 30th day of the Omer.

The Essence of Hod

All these events happen during this 5th week of the Omer under the sefiras of Hod. But what do these events have to do with “grace”? Hod is connected to gratitude and humility, but at its core, it is about realizing potential (hence where we get “refinement of movement” definition above). When the olympic gymnast performs so artfully and perfectly, it is because of so much work that led to the fulfillment of their potential. We would surely call them graceful.

But how is that connected to God and the bestowal of blessing definition? Another way of looking at Hod is as an acknowledgement. Hod is tied to the Hebrew word Hodeh or gratitude. And gratitude is nothing more than the acknowledgement of when someone or something satisfies a want or a need. So when that olympian is awarded their gold medal (an acknowledgement by the world of the fulfillment of their potential) they turn around and acknowledge all the people who have helped them get there. They thank their parents, their spouse, their coach, and God.

When God gives you blessing within the context of “grace”, it is an acknowledgement of your efforts and your striving toward your potential.

Hod in the Week

So with that understanding let’s look back at the holidays of the week. For Pesach Sheni, the korban pesach is one of the quintessential mitzvahs. For positive mitzvahs (mitzvahs where you have to do something, opposed to mitzvahs where you have to abstain from something) you usually don’t get punishment if you neglect them. You don’t get the spiritual rewards, so you basically just missed out. The only exception to that is bris milah (circumscision) and the korban pesach. Those are the only two mitzvahs that you do get a punishment for not doing them.

However, in the case of these spiritually impure Jews, because they were carrying the coffin of Joseph (something that had to be done) they were exempt from doing the mitzvah. No punishment! So what’s the problem? Why did they insist on doing the korban pesach anyway? Because these Jews understood how quintessential the korban pesach mitzvah was to being a Jew that they demanded to be a part of it. And it is for that insistence that God acknowledges their right to be at the level of the other Jews who got to partake. It’s an act of Hod.

With the manna in the desert, the Jews are complaining and saying they’d be better off in Egypt. Why would God reward them with the most amazing food every created? The week before Hod is Netzach or endurance. When we are striving to better ourselves, there is always going to be a pushback in the other direction. But when we’ve hit a wall and we just don’t think we can go any further, that is often when the breakthrough comes. Growth is painful and hard. It is God’s acknowledgement of this that prompts mercy. The manna is another act of Hod.

Lag B’Omer. Virtually ALL of Rabbi Akiva’s students die. His whole legacy! Then one day the death stops. After that Rabbi Akiva gets 5 new students. 5 compared to 24,000? Doesn’t sound like much of a consolation. But from those 5 students, virtually everything we know about the Oral Torah comes from them. In fact, one of those 5 students was Rabbi Shimon Bar Yochai, the rabbi who wrote the Zohar (the primary book of Kabbalah). And Rabbi Shimon Bar Yochai’s yahrzeit happens to be Lag B’Omer. Also Lag B’Omer’s sefira is Hod of Hod. The day of Hod in the week of Hod. How is this an acknowledgement from God? The Oral Torah is a practical and human application of the Torah. It is what keeps Torah alive and relevant. And believe me, it takes much more of your potential to learn the depths of the Talmud than just learning the written Torah. 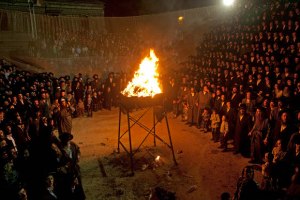 So being that we’re in the midst of all this Hod, what does that mean for us? If you’ve been striving to be better, this is a week to take a breath and recognize how much you’ve grown and accomplished. If, on the other hand, you feel the desire to grow and haven’t acted on it, it is important to recognize freewill’s role in all of this. If grace is a recognition of potential, potential can only exist because of freewill. Because you can only rise to your potential if you have the freedom to do so. And lastly, if you are beginning to see the fruits of your labors, remember that it doesn’t end with Hod. We still have two more weeks until Shavuos. But now that we recognize that our potential is finally blossoming, what do we do with that? Do we become content and settle? Or do we strive on to make this growth part of our core (Yesod/foundation) and take the final steps to master ourselves (Malchus)?