There’s no denying that we love to gossip.  From magazines to twitter feeds, gossip is an industry unto itself.   On the personal level, we’ve probably all talked about someone we know in a not-great-light to a friend, family member, or coworker.   Science has even studied just how talking about others runs deep into our personal and social wiring.

“Anthropologists believe that throughout human history, gossip has been a way for us to bond with others—and sometimes a tool to isolate those who aren’t supporting the group. ”   — Psychology Today

Deep down we know we probably shouldn’t.  But c’mon, we can’t all be saints (or chassids).  But what most people don’t realize is that Judaism regards talking about others as one of the most serious matters in all of Torah.

The Prohibition of Lashon Hara 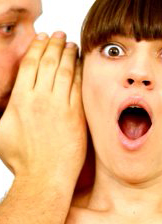 Lashon hara (literally the evil tongue), motzi shem ra (spreading a false rumor), and rechilus (talebearing, gossip) are all distinct and important classifications of talking about others.  The main focus of this post is going to be lashon hara which is defined as Speaking disparagingly of another person, even if the information is entirely true.

And if you don’t think that is severe enough the Torah even forbids you from LISTENING to lashon hara.   “If one finds themselves among a group of people speaking lashon hara… and he cannot leave and is too embarrassed to plug his ears, he then must… (1) Resolve not to believe the lashon hara. (2) He must not enjoy hearing it. (3) He must not say anything or show any expression that implies his assent. If possible he should show them an expression of disfavor.” (Chafetz Chiam). It’s even forbidden to say things that may cause others to speak lashon hara.  So you saying, “Let’s not talk about so-and-so.  I don’t want to speak about what happened,” would be forbidden.

Torah writings often compare lashon hara to murder and it is not difficult to see why.  Reputations, relationships, one’s emotional wellbeing, even one’s livelihood can all be effected by the opinions in the community in which they live.  But what most people don’t understand is how of an effect they have on those around them.  It’s so easy to shrug off our words as harmless, but the mere attitude you have about someone can influence the energy of a social group.

And what’s worse is that lashon hara and gossip are extremely difficult, if not impossible to take back.  There’s famous chasidic story which illustrates this difficulty.

A man who had gone around slandering a rabbi finally realized what he had done was wrong.  So he sought out the rabbi for forgiveness.  The rabbi told him he would be forgiven upon completing two tasks.  The first task was to go to the roof of his house and rip open a feather pillow and toss it into the wind.  Once he completed this, he would need to return to the rabbi for the second task.

The man did just as the rabbi said that very night and returned to the rabbi in the morning to inform him.  The rabbi then told the man of his second task.  “Now go and gather everyone of the feathers.”  The man insisted that it was impossible.  “Precisely,” the rabbi answered.

Now I get that the idea of actually following the laws of lashon hara seem completely unrealistic this day in age, if not impossible.  And sure it is difficult, but since when has anything worthwhile been easy?  A lot of the Torah I’ve come to learn has dealt with matters between man and God.  And because of that I haven’t always been able to properly explain why I do certain things now to a person living in the secular world.  But the ideas behind lashon hara make sense to any person with a decent sense of humanity when you think about them.  It unfortunately happens to be something that is so widely practiced, we just go along with it.  And the fact that so many of us will do something we know to be wrong simply because the society we live in condones it, should certainly give all of us pause about the world we live in.

Remember your words are powerful.  Think twice about what you bring into the world.