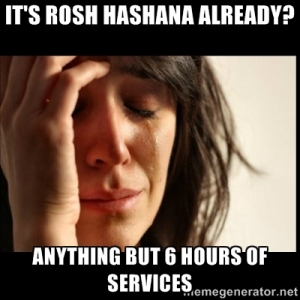 The vast majority of Jews in America don’t attend prayer services (aka davening) very often.  But there are two days that if anyone has any shred of religious connection will attend synagogue for.  The highest of holidays, Rosh Hashana and Yom Kippur.  And they are coming up in a few weeks.  So I thought I’d take a couple of posts to share the things that turned a dreaded chore into an enlightening and  remarkable experience to look forward to.

LOST in the service.

I remember going to my reform temple for years, suffering in boredom as we were summoned to stand then sit then stand.  The Rabbi says a prayer then the choir sings that prayer.  Sometimes the prayers I had memorized and sometimes the prayers… I guess the Hebrew teacher didn’t have time to teach us.  I knew the Torah reading was coming sooner or later and that a shofar blast gets sounded, then a sermon followed finally by kaddish.  Then I’d be free.

I spent most of the services either reading random prayers and psalms as I thumbed my way through the machzor (special holiday prayer book) or I’d let my mind wander, contemplating anything that grabbed my attention.  But one thing was uniformly true; I was completely detached from anything that was happening on the bimah.

But a couple of years ago I decided to sit down and learn the structure of the service and everything changed.  One of the biggest differences between Orthodox services and the Reform ones is that virtually every Orthodox service is going to be identical (more or less,  not taking into account ashkenazi/sephardic differences).  Meaning you could go to Mexico, Germany, the Virgin Islands, and if you’re in an Orthodox service you know exactly what you’re getting yourself into.  So with out further ado, I’m going to go through the major points of a regular service.

Men are commanded to daven (pray) 3 times a day.  Shacharis (morning), Mincha (afternoon), Maariv (evening).  On Shabbos, Rosh Chodesh, and holidays, there is a 4th service, Mussaf.  And Neilah which is a 5th service for the closing of Yom Kippur.  These services correspond to the sacrifices we used to do in the Temple.  But since the loss of the Temple, we now daven instead.

Also known as the Amidah, Shemonah Esrei literally means 18 and refers to the 18 prayers (though there are actually 19 now.)  This is the core of any service.  The order goes as follows…

You know you’re in a Shemoneh Esrei when everyone takes three steps back then three steps forward, starts wafting like candles, and prays silently.  The three steps back symbolize the leaving of the mundane physical world and entering the realm of the spiritual.  At this point, it is believed that the closest possible relationship to God is available.

The above structure is only for a regular day of prayer.  On Shabbos and holidays, the prayers change.  But the several of the prayers such as Avos, Gevuros, Modim, and Shalom remain.

During the High Holiday services, I would highly recommend trying your best to follow along with this part of the service.  It’s here that the essence of the holiday is laid out and one’s personal connection to God is strongest.  You don’t have to do it in Hebrew and it doesn’t matter if you fall behind.  Last year, I simply took my time during the Rosh Hashana Shemoneh Esrei, reading each word in English slowly and deliberately and I had one of the strongest connections with davening I’ve ever experienced.

This time of Year.

In previous posts I’ve mentioned that Judaism believes that certain spiritual energies are available during different times of the year.  For Rosh Hashana it’s Judgement, which is actually a good thing.  And I’ll talk more about that in a future post.  But it’s widely believed that for these holidays, Rosh Hashana, Yom Kippur, and Succos,  the presence of God is more easily felt.  I remember growing up going to temple on Rosh Hashana, my father (who is not a particularly spiritual or religious individual) expressing a fondness for the holidays and expressing that it would be nice if we went to temple more often.

Perhaps it was just about getting the family together, but I happen to believe he tapped into that energy (unknowingly).  And if you are at all inclined to foster or develop a relationship with God, this is the time to do it. 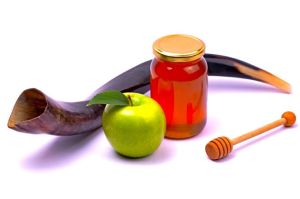