Yom Kippur.  The day of atonement. The day where the Jews get all their sins wiped away. All you have to do is two things: suffer fasting for 25 hours and sit through services all day. Not sure which one is worse.

But we have Teshuvah which we can do any day. A process by which we can have atonement anytime. Why do we need a day like Yom Kippur if Teshuvah exists?

To answer this we should look at the nature of how Judaism looks at sin. A while back I did a post about this very idea.  If you don’t have time to read that post, I’ll quickly boil it down. Judaism doesn’t regard sin as “you did something bad, now you are bad and must suffer horribly for it.” Instead it generally views sins as a missed opportunity to have done the right thing.

But something I didn’t mention last time is the effect of “missing that mark.” Judaism has a strong belief that we have a true version of ourselves. Another way of putting this is the best version of ourselves. And a religious way of putting it would be the version of ourself that is most in touch with God. Doing sin takes us away from that true version. The things we do that we’re not proud of burden us. They make it harder for us to keep to the direction we know we really want to be moving. And religiously speaking, they create a divide between ourselves and our connection with God.

To repair this divide, Judaism prescribes a process for redemption known as Teshuvah. It’s a combination of reflection, meditation, and verbalization designed to not just achieve attonement but actually aid in changing one’s own character traits.  The core parts of Teshuvah are Viduy (verbalization), Charata (regret), and Azivah HaChet (leaving behind the behavior).  The most impactful breakdown of said process was given to me by none other than the Rav himself, Rabbi Denbo in 7 steps.

1)  Acknowledge the Act
Obviously if you’re going to seek forgiveness for something, you probably want to identify what that act is.

2) Articulate
Great, you’ve isolated the  problem. But now you actually have to verbally articulate it and that it was bad. You can’t get away with “Well I was late to work, but everyone is late every once in a while…” Nope. You gotta say It was wrong.

3) Regret
Okay. You know it’s wrong. But in order to truly inspire change one has to have the desire to actually change. The person has to now see the act as deplorable. This is a hard one because it requires a realignment of perspective. To the degree you are able to perform this step is the degree you’ll be able to stay on track.

4) Recognition of Consequences
As with anything, if you don’t believe your actions matter, why bother with the effort? Judaism holds that everything you do has an effect, both in this world and in a spiritual sense. And that one day you will be held accountable for those actions. Usually when someone does something they shouldn’t (or is weighing doing the right thing) the thought comes into mind “what does it really matter?” Well if your perspective is that there is a consequence, that means that the decision certainly matters a lot.

5) Understanding that Teshuvah  Frees You of those Consequences!
Granted the physical consequences of your actions aren’t going to go away with Teshuvah. And if you’ve wronged someone, you don’t get atonement until you apologize to that individual. But with regard to judgement and spiritual consequences, you’re home free on this particular offense. And part of the process of Teshuvah is being real with that.  If you do Teshuvah, but you’re still carrying around the burden, you’ve not completed the process to it’s full extent.

6) Cost/Benefit Analysis. The Bad Choice.
As a way of reinforcing the behavior one should make an accounting by contemplating all the costs and benefits of making the wrong decision. And be honest. Sometimes it’s much easier to do the wrong thing. I would have lost an opportunity to be popular if I didn’t Lashon Hara, but how much did it really affect the person I talked about?  By yelling at my coworker it really felt good when they messed up…but I did damage the relationship.

7) Cost/Benefit Analysis. The Good Choice.
To complete the process, do the same thing, but focusing on the good.  I said I wasn’t going to drink tonight and I did. Cost: would have had that nagging sensation all night. Benefit: I might have grown as a person and I would have known my emotions don’t rule me.

Completing this process is extraordinarily powerful. But this brings us back to the original question, if we can do this everyday… why do we need Yom Kippur???

A Day of Atonement

As I’ve illustrated in a previous post, on a spiritual level certain opportunities are available to us at certain times in the year. Yom Kippur is that opportunity for atonement. In fact, if a Jew does nothing to partake in Yom Kippur in any way, they will still get some degree of atonement.

For those who do partake in the day, the rewards will be much greater. If you look at the above process. Those are a lot of steps and a lot of work. Imagine doing that process for every mistake you made in the year. Not only would it be impossible on level of sheer effort required, there are mistakes you make you simply aren’t aware of.  Yom Kippur hits EVERYTHING. 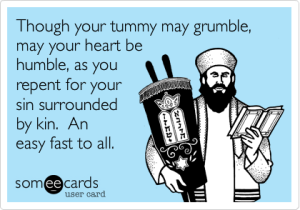