Lech Lecha is particularly special to me because it was my bar mitzvah parsha. Granted I remember almost nothing save for the first line (insert sing-songy Vi-ya-heee Avraham). Sadly, upon actually finding those words in the Torah, I’ve come to realize that I read very little of the actual portion. But luckily, I’ve been able to go back and learn some truly profound insights into the parsha.

Avraham (originally named Avram) is the first time in the Torah we see a Jew. Granted it’s not a Jew in the terms we’d think of today. He didn’t have the Torah. He didn’t wear a yarmulke. But compared to the figures we’ve seen thus far (Adam and Noah) Avraham is when the Jewish people start to take shape.  God makes a series of covenants with Avraham over a period of years starting when he’s 70.  But one particular covenant isn’t all blessings and children as numerous as the stars.

And Avram said, “Behold, You have given me no seed, and behold, one of my household will inherit me.” And behold, the word of the Lord came to him, saying, “This one will not be your heir;  only he that will come from within your body will be your heir.” And He took him outside, and He said, “Please look heavenward and count the stars, if you are able to count them.” And He said to him, “So will be your seed.” And he believed in the Lord, and He accounted it to him as righteousness. Bereishis 14:3

Basically, Avram wants to pass along his mission of educating the world about God. It looks like he’s not going to have a son, so he figures his heir will be his right hand man Eliezer. God says no, you will have a child and that will lead to a nation, etc. But at the end Avram believes God. That is important to remember.

Maybe I shouldn’t have said that.

And He said to him, “I am the Lord, Who brought you forth from Ur of the Chaldees, to give you this land to inherit it.” Bereishis 15:7 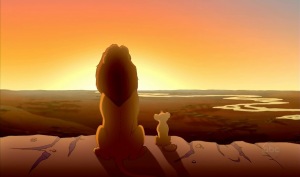 Basically God does that thing in the Lion King where Mufasa tells Simba his kingdom is everything the light touches.  Avram responds…

And he said, “O Lord God, how will I know that I will inherit it?”

To which God responds…

And He said to Abram, “You shall surely know that your seed will be strangers in a land that is not theirs, and they will enslave them and oppress them, for four hundred years.

Uhhhh…… WHAT? Avram ask God a simple question and for it God decides to enslave the Jewish people!!!????

What’s going on here? Avram believes that God is going to give him a son, we established that in the above quote. Why wouldn’t he believe God would give him the land of Canaan to his progeny? And even if Avram doesn’t believe God, why would God punish Avram’s children and not Avram?

So let’s look a little closer. We started with Avram learning his children will indeed pass on his mission and not Eliezer. Why is that so important? Eliezer is a dedicated servant and he knows Avrams teachings. But God says, no, to truly carry on the mission, the heir has to be from “within [Avram’s] body.” It is only from Avram’s children that the teaching won’t be just parroted and regurgitated, but truly mastered and developed. The teachings will be made their own.

Then Avram questions “How will I know I will inherit it?”  Obviously, Avram isn’t asking whether God is going to give him the land or not.  He’s asking if he can trust his children will in fact carry on his mission. And to that God decides the consequence is to sentence the children of Israel to slavery.

What consolation could centuries of slavery possibly offer?  If there is anything you can say about a slave is that they are driven. Granted is it an external force driving them (being whipped is going to drive anyone). What God needed was for the Jewish people to have that drive engrained into the very fiber of their DNA. And it worked. To this very day Jews all over the world share a drive for meaning.

Granted we may be in disagreement over what meaning is, but there’s no doubt of our mark left on the world.  22% of all individual recipients of the Nobel Prize between 1901 and 2015 have been Jewish. The pacemaker and the defibrillator, cholera & bubonic plague vaccines, Waze, and hundreds of discoveries and inventions from Jewish ancestry have completely changed the way we live.

And according to the Torah, all that came from God’s decision to sentence Avram’s children to centuries of hard labor. It was only from that event that the family would become a nation, bound together not just from DNA or ideology, but from shared experience and a relentless desire for more.