Imagine you have an appointment to meet the President of the United States. If you’re not a fan of our current President, please substitute accordingly. Hours before the arrival, secret service agents come to inspect your house for security issues, block off the streets, etc. They tell you the President is going to arrive at such-and-such time, you’ll have so many minutes to talk. You’ll do the photo op with the hand shake, get the pen, and he’ll be off.

The secret service agents assume their posts and finally you see the motorcade pull in from around the corner.  Ushered in by his aides and press, the leader of the free world enters your home, shakes your hand, then tells everyone he would like to be alone with you. Finally, with the chaos of procedure gone, it is just you and him. Right as you’re about to begin conversation, there is a knock at the back door. Somehow three beggars have gotten past security and are asking for some spare change.

You turn and say “Mr. President, I’ll be just a couple of minutes.” Leaving him on your sofa, you proceed to wash the beggar’s feet and cook them a meal. Do you think that when you return, the President is going to be waiting for you?

Now imagine if instead of it being the President, it’s God. 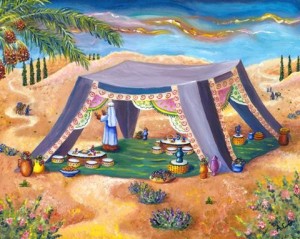 In this week’s parsha, Avraham does exactly that.  Vayeira starts out with Avraham just having circumcised himself. God visits Avraham as one visits the sick. He has made it especially hot, so there will be no travelers and Avraham won’t have to be hospitable to anyone as he is recuperating. But sure enough three travelers arrive and Avraham says hold on a minute God, immediately runs from his door to greet them.

And he lifted his eyes and saw, and behold, three men were standing beside him, and he saw and he ran toward them from the entrance of the tent, and he prostrated himself to the ground. And he said, “My Lord, if only I have found favor in your eyes, please do not pass on from beside your servant. Bereishis 18:2

You could argue that God is with Avraham all the time. But I’d counter that with the fact that in the Torah, when Avraham talks to God, it is at very specific times. In fact, God didn’t first appear to Avraham until the age of 70. And the entire time Lot was living with him, God never appeared. So don’t think that Avraham will just chill with God later in the afternoon.

The role of a Jew.

So what are we to take away from this? Judaism isn’t about basking in some radiant glow of godliness. We’re not supposed to be on a mountain, detached from society praying 24/7.  We are supposed to be in the world, doing mitzvahs, and being a light unto the nations. And so it follows that the one thing better than sitting with the Creator himself is going out and being God-like.