Ever since I was a little kid I’ve been obsessed with the movie, The Karate Kid. The acting, the soundtrack, and as I got older, the writing. It’s the movie I watch when I’m held up in bed with a cold. Everyone has those “I’m sick and I wanna watch a movie today” movies, no?

I always identified with Daniel San because I could relate to moving, being in a new school, and of course, being bullied in my High School years. I know, everyone nowadays seems to have a bully story. But some of us got bullied a bit more than other kids, especially those of us who have always been extra sensitive and spiritual.

One time, probably about 8 years ago, I was nursing a cold with some chicken soup and my Special Edition copy of Karate Kid, when it hit me, “Daniel San IS Jacob.”

1. Worked for a long time on what seemed like tedious tasks but later he realized that each moment of that discipline led him to something greater-flexing of the right muscles. “Sand the floor, Paint the fence, Wax on, wax off.”

2. Kicked in the leg “Sweep the Leg Jonny”

3. Enemy was a guy who was fair skinned who got red in the face, and had light hair. (Jonny)

4. Conflict ultimately was not about the “guys” at school, but with himself.

5. He had to gain Balance within himself. He didn’t give up in the heat of the moment of battle.

6. Both Jonny and Daniel cried at the scene of the battle.

7. Got a bracha from his enemy at the end of their battle.

8. Special “Coincidence”: Logo of the Miyagi Dojo was a Bonsai Tree and Sun.

1. Yaakov worked for 7 years for one wife for Lavan and then another 7 years for his 2nd wife. Each day that he spent on Lavan’s farm made him stronger as he never succumbed to becoming on the level of Lavan.

2. Kicked in the sinew/hip/part of the leg.

3. Enemy was a guy who was fair skinned who got red in the face, and had light hair. (Esauv)

4. Conflict was said to be him fighting his yeitzar hora (evil inclination from within)

5. Had to gain Balance within himself. He didn’t give up in the heat of the moment of battle.

6. Both Yaakov and Eisav cried at the scene of the battle. “Vaybehku” “And they wept”

7. Got a bracha from his enemy at the end of their battle.

8. “And the sun shone for him” Referred to by chazal as a sign that when the sun rose with Yaakov changing to Israel we had a sign that Moshiach would come. 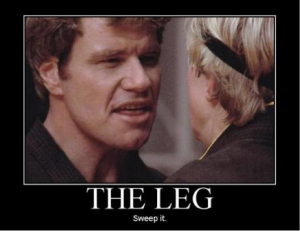 He’s very sure about his turkey choice for dinner.

The biggest take away I always get from the movie is the idea of gaining balance within yourself as the number one priority for all of us. Until we have that, we can’t win in social circles, with love, nor our careers. Achieving personal power and balance within one’s self is perhaps the most important lesson of this week’s parsha and life in general.

According to Rav Yisrael Solanter, founder of the Mussar Movement (essentially Judaism’s first official Self Help section of Torah books), “Walking the middle path” is always the way to go. Daniel San and Yaakov Avinu were able to show us through their stories how that is achieved-through facing yourself, lots of struggle (or Yisrael), prayer, meditation, hard work, learning new tools to deal with our surroundings, having faith, practicing all of those things again and again, and being open to receiving miracles. I am grateful for being able to have the clarity to walk the middle path as often as I can.

“And the Sun shone for him”

Barbara Heller is a writer, actress, singer, educator, and voice over artist living in the Pico Robertson ‘chood. She often finds herself doing voice match for big celebrities on Hollywood movies, or writing one of her films, or new media projects in coffee shops. She loves Shabbat in the ‘chood, and enjoys baking and meditating. Check out more of her creativity at: www.BarbailaProductions.com, and www.BarbHeller.com. SixDegreesOfKosherBacon is delighted to have Barbara as a guest blogger this week.