There is a Midrash which asks the question “What is the most important verse in all of Torah?” And the discussion comes up with three answers.

Looking at the three statements, the Shema is an obvious candidate. Jews say it twice a day, it goes in our mezuzahs and tefillin. But it’s said the Shema appeals to the brain. We need to intellectually understand that God is one. Many people (including those who aren’t Jewish) might choose Rabbi Hillel’s quote. This one is about compassion and thus is emotional. But why would anyone choose this last one?

Let me answer your question with another question. Which is better? Give 1 person a thousand dollars? Or give a hundred people 10 dollars? More people benefit in one scenario, but in the other you potentially could have really change someone’s life! Well the Rabbis say it’s the $10 a hundred times. Why? It cultivates a behavior of giving. And that’s what quote #3 is talking about. Cultivating behavior.

It is wonderful to understand why we should do something good. Hoarding all your food and money may seem like a great idea, but sharing it, investing it in the community, that’s something you can tangibly see the effects of. The issue with intellect being the only motivating factor is that it doesn’t move anyone. It doesn’t inspire. It’s studying, and dry, and is a lot less likely to get a group of people impassioned to follow your example.

It’s fantastic to be emotionally moved. To get that feeling of joy from giving. They say the mitzvah of Bikur Cholim (visiting the sick) is so powerful because it opens you up emotionally, seeing those who need help. It will move you to be a more compassionate person. But the problem with emotional is that it only causes you to act when you feel like doing it. 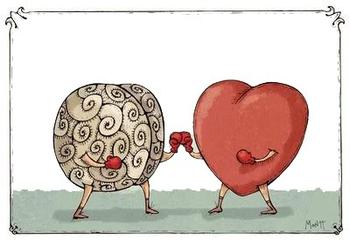 But why the sacrifice?

Great! Behavior and consistency! But there are plenty of other verses from the Torah that tell you to do things regularly. Why this one about animal sacrifices? It’s so hard to appreciate or connect to this seemingly barbaric practice.

But what we have to understand is the core nature of sacrifice. To take something of real quantifiable value and “waste it” for the sake of a connection to God. Sure, in today’s world you could “sacrifice” money with tzedakah. But a fantastic Rabbi I learn from gives this profound insight,

Sacrifices are all about changing ourselves and growing. The same Torah that teaches us that the world stands in the merit of sacrifices also teaches us that the world stands on the merit of one who remains silent in an argument. The submissiveness and self control we exhibit when we do what’s right and don’t allow our ego to get in our way, are what is sustaining the world.
—Rabbi Ron Jawary

At least twice daily, we are confronted with arguments. From someone being wrong at work to being cut off in traffic. And sure, if someone is really wrong about something it might be irresponsible to not inform them of their mistake. But for the vast majority of the arguments and conflicts we come across, they’re really about our desire to be right and to be recognized for it.  It is in those moments that the Torah is saying, stop, take a breath, and let it go. You’ll have sacrificed your ego, contributed slightly to a better world, and made a stronger connection to the Almighty.

And if we can make that a daily behavior, then we are truly living what the Torah is all about.