Purim is just a week away. Growing up, all holidays other than Rosh Hashana, Yom Kippur, Chanukah, and Passover, I knew virtually nothing about. I vaguely remember dressing up for Purim at my Jewish preschool, eating pastries that looked like the bad guy’s tri-corner hat. Oh and there’s someone named Esther. But as I’ve become more in touch with my Judaism, the more I learn about Purim the more I consider it the most important holiday for modern Jews.

To start off, I should address that there are two types of Jewish Holidays. Holidays that are in the Torah: Passover, Rosh HaShana, Yom Kippur, Shavous, Succos, Tu Bishvat, etc.  These are spoken about directly in the Five Books of Moses (aka Pentateuch, aka Chumash). Now hold up, I’m about to get Kabbalastic here; each Torah holiday has its own unique spiritual energy. And said energy is supposed to be easier to access during that particular time. Passover? Freedom. Succos? Joy. Rosh HaShana? Closeness to HaShem. So taking those holidays to heart is a really great way to get in touch with personal spiritual growth.

Rabbinical Holidays, on the other hand, happened after the Torah period in Jewish history. Chanukah, Tisha B’av, and Purim. They were added by the Rabbis after. Why? Because something happened in our history that made a drastic change to what it meant to be a Jew. Tisha B’av – We lost the Temple and we were sent into exile (422 BCE). Chanukah – It was the first time assimilation became wide spread (165 BCE). Smack in the middle of those two is Purim (355 BCE). What was Purim a response to? To understand that, let’s understand what was going on at the time. 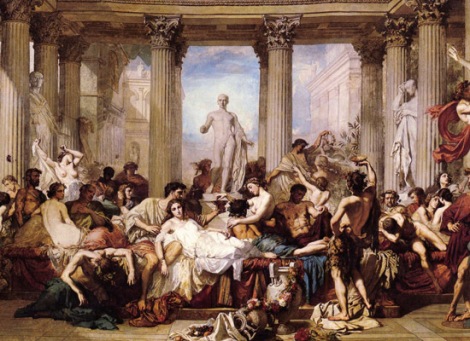 Purim starts out with a massive celebration by the Persian king Ahasuerus. If you put Mardi Gras, St. Patrick’s Day, and Brazil winning the World Cup into a blender and multiplied it by 10, you still wouldn’t be anywhere near scope of Ahasuerus’s party. It was 180 days long where no citizen was to be denied the wine of their choice. Then that was followed by an even bigger party of 7 days where they upped the ante. Why was the King of Persia partying so hard? There had been a prophesy that the Temple would be rebuilt after 70 years. And according to all of Ahasuerus’s calculations, those 70 years had passed. It’s time to party like it’s 1999(BCE.)

If you remember from last week’s post, the Mishkon gave the Jews a place to tangibly feel God’s presence. That Mishkon became the Temple and, in the time of Purim, the Jews have now been without said connection to God for 70 years. Meaning for the first time since the Torah years the vast majority of Jews living weren’t alive when the Temple stood.

A World without God

And that’s what changed in the Jewish experience. You see Purim is the only Bible story where God is never mentioned. Not once! How can you have a Bible story without God? Because Purim perfectly  reflects the new reality of the world. You can go through the Megillat Esther (the Book of Esther) and read it as a completely secular story. The genius of Esther as she perfectly plots a strategy to thwart Haman’s scheme for the Jews’ extermination. The relentless determination of Mordechai to get his message to the Queen before it’s too late. And the Jews’ unite like never before to fight a war against mobs of hatred. All spectacular moments that would make Game of Thrones look like a Youtube fan-film.

Or you can see the hidden hand of God threaded throughout the story. Haman’s lottery (Pur in Hebrew where we get the name Purim), the crazy sequence of events resulting in a Jewish woman as Queen of Persia, Ahasuerus’s sudden remembering Mordechai having saved his life resulting in Haman’s downfall. When seen though that lens, the story takes on a whole new dimension. A dimension which informs us on how to relate to God today.

Now we live in a world where we can look at any phenomenon and dissect it though physics, neurology, microbiology, thermodynamics, and other scientific disciplines I’m sure I’m not even aware of. We can look at events and determine the cause and effect. But that doesn’t give us purpose. A meaning to as to why.

In our age, we have to choose to see God in it. Only then can we look back and see God’s role in our lives.  Another words,  “believing is seeing.”  So this year if you decide to listen to the Megillah of Esther, give some thought to the coincidences, the choices, and all the moments touching on the idea of chance. Look at it secularly and religiously. “If only this had happened instead of that, how might the story be different?” It’s then that God’s place in the story will become clear to you. Then maybe reflect over the important moments of your life. You might seem him there too.