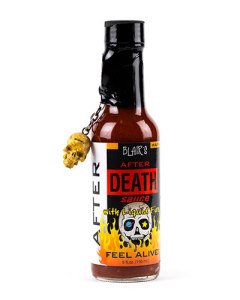 The “Death” referred to here is the death of Aaron’s two sons, Nadav and Avihu whereas, in Parshat Shemini, decided to take the law into their own hands and sacrifice beyond the time and place allotted.

And the Lord spoke to Moses after the death of Aaron’s two sons, when they drew near before the Lord, and they died. (Vayikra 16:1)

Going above and/or beyond the law is not always the better choice. The road of good intentions is sometimes bumpy and full of debt, bad break ups, and break outs. But hopefully, we can learn from the deaths or mis-fortune of others and if we’re wise enough take a path that is more kadosh, (or separated) from that which is not the best for us. The difficulty in olam ha ze (this physical world) is making the path our own and full of joy when we are trying to follow a deemed kosher blueprint.

Especially living in a society where as the above video portrays quite humorously, we’re surrounded by a budding generation of kids who believe if they just say it, will it, or believe it millions of dollars and fame will come to them as they sit in Starbucks drinking their lattes and getting high.

I was talking with a Police Officer this morning about how nowadays many people believe police people or laws are the enemy and led mostly by how they feel on any given day. We can’t always follow what we feel otherwise we may stay in bed way too long and not accomplish our life’s purpose. The Torah is full of law, or as I like to think of it, a recipe fashioned by G-d given over to Moses and the Israelites in order to reflect a big light to the rest of the world. A recipe to make us all into our biggest happiest most peaceful and fulfilled shining lights to make the world a better place.

It made me sad that the police officer gets sneered at while he’s trying to only protect those around him. I’m not saying that all police officers are perfect people and only to do good. But, I would challenge those who think they’re all bad and that the practice itself of having laws to protect us isn’t a great thing. I’ve had the privilege of living in 12 different countries all for at least about a month or so and I’ve seen some corruption and terrible things happen without democracy accompanied by simple civil laws. Please note that most of the civil laws we know of today got their start in Judeo-Christian law.

Main points from this parsha.

This parsha tackles a few important laws dealing with, pardon the vulgar connotation, things that could/should/shouldn’t go inside of us.

We just got out of Egypt as a people. We finally have our freedom and I don’t know about you but I can feel in the air there’s been a shift in terms of breaking free within my life (albeit by force in most cases) of the things that are not good for me and keep me locked up in chains in some way. Whatever these things are for you, take a deep breath, stand up in a vav (the Hebrew letter vav) or Tadasana-closest to this pose in yoga, and ask your Creator, what holds me back in my life from being my most free, fulfilled and peaceful self? See what comes up for you and see if there are maybe one or two of these laws that maybe you need to pay attention to a little more?

Sending you only blessings as we embark closer to our full reception of The Torah coming up in a few weeks on Shavuot, and all things truly good in our lives.

Barbara Heller is a writer, actress, singer, educator, and voice over artist living in the Pico Robertson ‘chood. She often finds herself doing voice match for big celebrities on Hollywood movies, or writing one of her films, or new media projects in coffee shops. She loves Shabbat in the ‘chood, and enjoys baking and meditating. Check out more of her creativity at: www.BarbailaProductions.com, and www.BarbHeller.com. SixDegreesOfKosherBacon is delighted to have Barbara as a guest blogger this week.

One response to “Acharei Mot: Going above and beyond is not always the better choice. – by Barbara Heller”