If you’re not an observant Jew, you may not know about the holiday of Shavuos. It takes place 50 days after first day of Passover, which commemorates how long the Jews walked in the desert until they reached Mount Sinai. Upon reaching said mountain, God revealed himself to the entire nation and gave them the Torah. Well… technically just the 10 Commandments… actually the first 2 Commandments and Moses gave the rest. Depending on interpretation all 3 are true, but that’s a different discussion.

Regardless of what was exactly given at Sinai, whatever the essence of the Torah is and all that would stem from it (the written Bible, that Talmud, the New Testament, the Quran) came into the world and into human hands on Shavuos. So in preparation of this chag, I thought I’d go through the 10 Commandments and address some common misunderstandings about them. 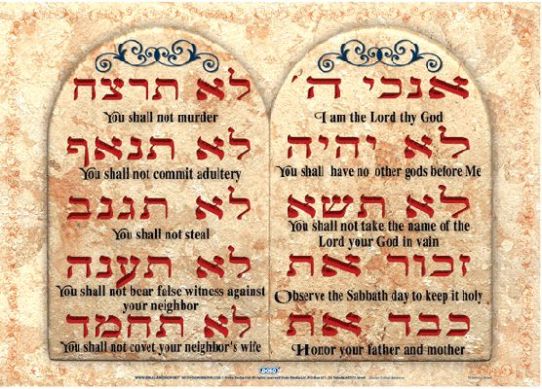 Ten Commandments is a bit of a mistranslation. When we say commandments,  we’re usually talking about mitzvahs. Specific laws outlined in the Torah by God. Within the “10 Commandments” are in fact 14 mitzvahs. The actual term in the Hebrew is עשרת הדברות (ahseres hadribros). A more accurate translation would be the 10 Statements. But “statements” doesn’t quite have the gravitas in English that commandments do. Can you imagine the Cecil B. Demille classic being called the Ten Statements?

First Commandment – “I am” is a commandment?

But the Rambam brings down that “I am Hashem, your God,” is the commandment. That knowing Hashem is God is what you actually have to do. It’s a process. You have to have clarity that it is in fact true and you have to remind yourself of it everyday. Hence why the next line is “who brought you out of the land of Egypt.” It’s the proof for that generation. They just had it happen to them.

Most Jewish Ten Commandments tablets list the “no other Gods” part here and group it with the prohibition of graven idols. The temptation to worship an idol is something that’s so foreign in today’s world, it’s nearly impossible to relate to. When was the last time you felt like bowing down to a totem poll? But the core of idolatry still exists. It exists in that which we give power to. Anything that we truly believe runs our lives instead of God is idolatry. For some it’s superstition. For others it’s money. But the most dangerous form of idolatry is worshiping yourself. And Alec Baldwin’s performance in the 1993 movie Malice expresses the sentiment exactly.

Third Commandment – What’s in a Name?

“Do not say the Name of Hashem, your God, in vain.” This one’s not actually about cursing using God’s name. Don’t get me wrong, that’s certainly prohibited in the Torah. Just not here per se. What this is really talking about is swearing an oath invoking God’s name, and not keeping that oath. In Jewish tradition and Hebrew, names aren’t some arbitrary identification. Names contain the essence of the thing it describes. Dog in Hebrew is c’lave which literally translates to “like heart.” And we all know the saying, dog is man’s best friend. The Name of God expresses a core aspect of God.  So it’s definitely bad to say it unnecessarily. But to take an oath in God’s Name as a one would have a co-signer on a lease and then break that oath… well… God help you.

Fourth Commandment – Remember not to Forget not to Work

For an in depth understanding of Shabbos check out my previous post.  But the commandment itself is to “Remember the Sabbath day to sanctify it.” Many places in the Torah we’re told to keep the Sabbath. But here it specifically says remember. And that is understood to be an active verb. Much like knowing Hashem is God, we need to make efforts to keep Shabbos on our mind and be aware of it. So what? We should wear Livestrong style rubber Shabbos bracelets? Obviously there are better ways to remember the Sabbath. I would say the best way is a matter of perspective. An outlook. Shabbos should be the focus of your week. The thing you look forward to. Buy some nice Tequila? Wait to open it on Shabbos. Anything you can do to remember that the point of working and toiling all week should be for the sake of Shabbos. Because without that, what is your life about?

If you look at the tablets, one side the commandments are about mitzvahs between God and man. On the other side the commandments are about mitzvahs between man and man. “Honor your father and mother,” is on the God to man side, but clearly is between man and man. But that’s actually not the case. None of us had perfect parents. If you are able to honor them in spite of their imperfections for their sake, then it’s a man to man commandment. But if you recognize that God choose to put you as the child of your specific parents, and that there are lessons to be learned from that situation, by putting aside what ever you need to put aside to honor them, then it is a commandment to God. It is no accident that it is the last of the commandment to God tablet, because it is the transitional commandment into man to man. And there’s a big lesson there. That if you are not able to rectify your relationship with your parents it will strongly affect your ability to have relationships in the society at large.

This commandment is usually identified as “Thou shall not kill.” But the Hebrew word תרצח (tertzach) is actually murder. So while one should certainly not kill, this prohibition is against unlawful killing. Because sometimes one must go to war against evil, or defend their life from an attacker, or that one can transgress so heinously that a court deem it necessary for a penalty of death.

This one’s actually pretty straightforward and I have little to add. Only that in Judaism, marriage isn’t just a piece of paper that links two people. It is an event that actually changes two people on a spiritual level. To disrupt that, even if both parties in the relationship are aware of and are allowing the infidelity, would be problematic.

Stealing is wrong, we can all agree to that. But this commandment is actually about kidnapping. Taking away a person from their life. It crosses a boundary far beyond the loss of personal property. Property can be replaced. But the years of someone’s life cannot.

Ninth Commandment –  And Nothing but the Truth…

“Do not bear false witness” isn’t about general lying. It’s specifically about giving false testimony in court. Our modern society understands this and calls it perjury. What we’re really talking about here is a prohibition of perverting justice.

“Do not covet the house of your fellow man. Do not covet the wife of your fellow man, his manservant… or anything that is your fellowman’s.” This is an odd one in that the prohibition is coveting. It’s one of the few places that the Torah prohibits a thought. The vast majority of the time it commands or prohibits actions. Whether a person can actually control or direct their thoughts is another discussion. But coveting is a progression of thought. I may desire my neighbor’s car, but I can do things to pursue or abstain from that desire. I can make efforts to let it go, or I can obsess on it. If I choose to take the challenge of letting it go, I’ll grow as an individual and become closer to mastering my desires. But if I fixate on that which is not mine, but my neighbors, there’s no telling how dark that desire can grow and what damage can come of it.

What about slander? Rape? Torture? ? There are certainly worse sins than some of the 10 listed above. Why were these 10 chosen? It’s because these 10 statements outline what life is all about. The first five are about what life’s focus should be and the last five are about what life’s focus should not be. The common theme to all of them are about one’s relationship to other human beings in society. Am I real with what God gave me and the place he put me and will do great things with that? Or will I step on another person to make the life that I want? Will I lie under oath? Will I steal someone’s life? Or will I swear an oath to change for the better in God’s name sincerely?

This blog post is dedicated to memory of my Aunt Lisa. May the neshama of Sarah Pearl bas Hanoch Yosef have an aliyah.