As you go through the Torah, you’ll find wisdom, dramatic stories, history, some not so dramatic listing of mitzvahs (aka commandments), and lots of meticulous census counting (especially in the book of Bamidbar/Numbers). And there are some odd things that can leave one perplexed, especially to a modern audience. This week’s Torah portion contains two odd things. Sotah and Nazir.

If a husband finds out that his wife and another man have been alone together and the wife refuses to admit to adultery, the husband and the wife can go to the Jewish court in Jerusalem. Once there, the woman is given a special drink referred to as “bitter waters”. If she is guilty, she dies on the spot and so does the man she had the affair with. If she is innocent she will be rewarded with motherhood. Known as the sotah procedure, it was designed to remove suspicion and was one of the seldom few times that someone could do something that would reveal God’s hand. But like many mitzvahs inapplicable today, this is one of the practices discontinued after the loss of the Temple. 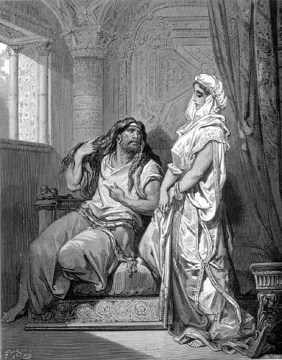 If one is moved to do so, they can take the Nazarite vow. The person becomes consecrated to God (for a given period of time) abstaining from wine, cutting their hair, and avoids all contact with the dead. If you know the story of Samson, he was a Nazir from birth, hence why cutting his hair lead to his downfall. (Note: Nazir’s don’t get usually superhuman strength.) But it’s a little odd as asceticism isn’t really praised in Judaism. It is holy to make kiddish (Shabbat blessing) on wine, l’chiams (celebratory toasts) are passed out for a mozel tov, and celibacy certainly isn’t practiced by rabbis as they are expected to marry and be fruitful. So why have this extreme vow?

Think of it as a course correction. If you feel that you are addicted to Twinkies so much that you’re going through boxes a day, consider abstaining for a bit. In the Mishneh Torah (basically an encyclopedia of all Jewish knowledge), its author the Rabbi Moshe ben Maimon (aka Maimonides, or Rambam) talks about refining character traits. He points out that every character trait has its polar opposite. Generosity to stinginess, laziness to driven and so on. One should identify where they are on that continuum, how close they are to one extreme, and then find the corresponding spot on the other side and temporarily strive for that. Eventually the person will center around the middle ground. So if they are kinda impatient, they only need be slightly more than average patient with others. However, if they are a total glutton, staunch dieting would be suitable. And it’s that extreme that the vow is meant for. If someone realizes something in their life is so detrimental that they have to change it, then the extreme is taken on.

The nazarite vow immediately follows the sotah procedure in the Torah. Why would God structure the parsha this way?  The Talmud explains, “…one who sees a [woman who has transgressed] in her state of degradation (dying from the sotah procedure), and perceives firsthand what frivolity and wine can cause, should immediately take a nazarite vow prohibiting him from drinking wine.” (Sotah 2a)

Rabbi Noach Weinberg points out an incredible insight on this, “Isn’t the person who witnessed the ordeal of the sotah the last one who needs to become a nazir? He has seen upfront the horrific consequences of too much wine. So why does the Torah teach that specifically he who has seen the sotah should become a nazir?”

R’ Weinberg goes on to explain, “If you have an insight but don’t act on it, you are going to lose that insight…If one does not translate his new awareness into some concrete action, the inspiration will fade and he will forget the lesson he learned.” We’ve all had deep epiphanies about life that have inspired us to change for good. And at those moments our resolve is sincere. But that resolve is emotional and it is very difficult to hold onto emotion permanently. The resolve must be supplemented by a physical change.

We all know ideas change the world. And that actions speak louder than words. But between an idea and an action is a declaration. When God made creation he spoke existence into being. This teaches us that what we say has tremendous power. The first step to lasting change is saying it out loud.

If you’re trying to be a master pianist, you’re going to need to dedicate some time to practicing the piano. But if you’re tying to do something less tangible (be kinder, have more patience, eat healthier) how to practice said trait is going to be less obvious. Outlining and committing to way of practicing is essential. Set a dedicated time. A minimum number of quantifiable achievements. Get people’s feedback or a partner to embark on the goal with you. (We all do better when we have a workout partner.)

Not only do the Nazir abstain from alcohol and hair cutting, but they must take on the vow for a minimum of 30 days. Why 30 days? It has been understood by the rabbis for centuries that in order for lasting change to truly take place, one must persist for at least 30 days. We learn this from Rosh Chodesh (the holiday which celebrates each month’s new moon.) Leading up to Rosh Chodesh, one is supposed to reflect what traits over the last month have persisted and what have fallen away. Then with the new moon, we choose which traits we wish to renew and have become part of our being and which ones we should stop. And if you’ve ever been on a diet or started a workout routine, you know that your body actively fights change until about 30 days. And after that period is when you start to see results.

A Week for Change

This week has been a difficult one with the tragedy in Orlando. In spite of such terror, people more than ever have come together in pursuit of love and peace. There is a demand for action and change. But if we are committed to making these changes lasting and permanent, our goals must endure beyond emotion. We must make that decision to change the world every day.