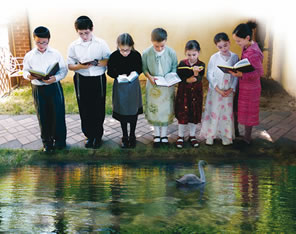 A couple of weeks ago, I started going through the nuts and bolts of the Shemoneh Esrei. I mainly focused on the opening (1-3) and closing (17-19) sets of prayers (re: see below). But I intentionally skipped over everything in between. That’s because depending on the holiday, the middle portion changes. 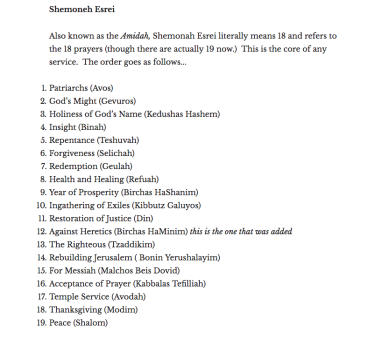 On a regular day, the middle section of the Shemoneh Esrei consists of prayers about requests. Healing, forgiveness, Moshiach, etc. But when it comes to Shabbos and Yom Tov (holidays), this middle portion switches to prayers tailored to the day. And it is in these prayers that the essence of the holiday is outlined.

On Shabbos, each prayer service (Shachris, Mincha, Maariv, and Mussaf) has their own unique kadosh hayom section. One talks about creation, another the sanctity of rest, etc. Passover’s kadosh hayom talks about freedom. Succos? Joy. But Rosh Hashana is a little more complicated.

We all know that Rosh Hashana is referred to as the Day of Judgment. And in Hebrew that would be Yom HaDin. But if you look in the prayer book, it calls the day, Yom HaZicharon (Day of Remembrance.) The other specific attribute about the holiday that is repeated in this section (and through out the entire holiday) acknowledges God as King. In fact, several other prayers we say during the year switch out the word God for King. So that leads to some interesting questions. 1) Why the day of remembrance? What’s being remembered? 2) Isn’t God always King? Why is it being made such a big deal of now?

Back in Parshas Shemos, when the Jews are still enslaved in Egypt, the following line was the turning point of when God decided to finally act.

Their plea about their enslavement went up to God. Elokim heard their cries and Elokim remembered His covenant with Avraham, with Yitzchok, and with Yaakov. (Shemos 2:24)

Immediately after this, Moses talks to God at the burning bush. That starts the sequence of events that leads to the Jews being freed from their enslavement. But what does it mean God remembered his covenant? God is God. He doesn’t forget things. The rabbis say that obviously God didn’t forget his covenant and suddenly remember it, but instead, it was the appropriate time to enact His covenant.

You probably have a lot of things on your plate to deal with. Some you’re going to do today. Some you’ll get to later in the week. And some you’ll put off until you need to deal with them (not taking your car in because it’s making that sound, or ignoring sensitivity in your molar because who has time for the dentist?) It’s this last category that you eventually reach a point where you decide, “Okay, it’s time to deal with this.” That’s the type of remembrance we’re talking about. With the covenant, it was time for the Jews to be freed. But what is God “remembering” on Rosh Hashana? That leads us to the 2nd question.

If God is the ruler of the world, as we say in every blessing, Baruch ata Hashem, Elokenu melech haolam…(king of the world) why are we drawing so much attention to it during this season? Is it more true now than normal? How can that be for an unchanging, infinite Being? Or maybe the bigger question is, do we really believe that God rules the world?

I know that for most of my life I didn’t. I would come to Rosh Hashana services (one of the two times a year I’d come to shul) and I’d be reading the prayer book because I was lost in the service. I’d see these words of praise and these declarations of kingship and I’d scoff and roll my eyes. Because if God was king, that would mean there had to be justice in the world. A purpose. And that He cared what I wanted. I just didn’t believe that. I wanted to. But I couldn’t.

But as I started to learn Torah, as I gained a Jewish understanding for the purpose of life and creation… That the reason there wasn’t justice (that we could see) in this world is because we aren’t doing our job to make it happen. From there I started to have a connection with God.

So a few Rosh Hashana’s ago, I let go of that contempt I was harboring against God. I took my time through the Shemoneh Esrei, the very process I’m attempting to teach in this blog post. I went at my own pace, read every word slowly, deliberately, considering them as I went. And when I got to the end something incredible happened. I won’t go into the specifics. But I will say I had a moment of extraordinary connection and I also became aware that there was a choice in front of me.

Rosh Hashana isn’t about God being more king than He usually is. It’s about us authentically recognizing that He is king more than we usually do. It is a time of remembrance for us to realign with the purpose we were created for. To stop putting off the things we know we could and should be doing.

We are judged. There’s no two ways about that. And it’s only after that judgment, seeing the report card that we can honestly ask God for a chance to do better. Which is what prepares you for Yom Kippur.

So this Rosh Hashana, remember, you can continue to look at the world as you always have or you can try looking at the world as if it was ruled by God. The former perspective says you might matter in this world or you might not. But the latter insists you most certainly do. And that you have an opportunity to tap into that purpose. Because if you’re not going to seize that opportunity, what’s the point of being here for another year?

One response to “Structure of Prayer – Rosh Hashana — By Ben”