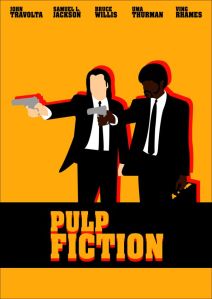 I know what you’re thinking. I’m going to go into Jules’s use of Ezekiel 25:17 as a speech before he “takes care of” his clients. Maybe go into how he dissects it in the final act then compare it to prominent classical Rabbinic commentaries? Though that is a nice idea, not this time. There is another connection between Quentin Tarantino’s classic and the Torah. We find it this week’s parsha, Vayishlach.

You know, the Christopher Walken one? His character, Captain Koons tells a young Butch Coolidge (Bruce Willis), the story of his father’s watch. I’d embed the speech but it definitely isn’t Torah appropriate. Basically, Koons tells the boy that the watch has been in the boy’s family for generations and that while he was with Butch’s father in a POW camp, Koons promised to deliver said watch to his newborn son. Which is what he does.

Butch wakes up. He’s a fully grown man, about to go into a boxing match… Long story short, he’s supposed to throw the match because a mob boss paid him to. He takes the money, wins the fight anyway, and is on his way with his wife to the airport to leave the country. One problem. Butch realizes his father’s watch was left at home… where the mob boss’s goons are definitely waiting to kill him.

In this week’s Torah portion we have Jacob finally ready to face his older brother. His big, military trained, guy who LOVES to fight, older brother. Jacob has done his best to prepare for the confrontation. He’s tried giving him gifts to make peace, he’s prepared to go to war, and he’s poured his heart out to God. But then he does something really odd.

He’s suddenly by himself when he gets attacked and has to fight with some guy all night. There’s a tremendous amount of depth to this event that I’ll go into some other time. But the question I want to focus on is, why was he suddenly alone?  Rashi says “He had forgotten small bottles and returned for them.” 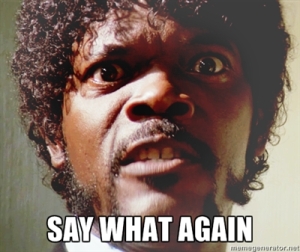 You’re about to have the biggest confrontation of your life, where you could die, or could end up having to kill your brother, and on the way you decide that the mason jars you use as drinking cups are too important to leave behind? Is the Torah giving the source for the stereotypical Jewish miser?

But it’s okay when Bruce Willis does it?

Some of us may still think Butch is crazy to go back for the watch. But at least we can understand sentimentality. We can sympathize with the loss of your past and the only connection one might have with a dead father. But with Jacob, we have no back story. Are we to believe one of the greatest tzadiks of all time risked his life for meaningless material possessions?

Yes in that Jacob does go back for material possessions. But no, they are not meaningless. Because a tzadik doesn’t waste. During the Great Depression, no one threw anything away. Everything was reused and recycled until it was reduced to nothing. You would never buy a meaningless, useless trinket or some juicer you got on sale on Black Friday. Everything had value, a purpose, and a need. And that exactly how a tzadik lives. Our money is  the product of our time and our work and it’s one of the main ways we are able to affect change in the world. To be frivolous means we’ve missed an opportunity to do some good. An opportunity to capitalize on living a life of meaning. Which our friend Jules will learn by the end of the movie.

“You know what the funniest thing about Europe is? It’s the little differences.”

There is a deeper message behind these “tiny vessels” left behind. Jacob was caring about the small things. And it’s the small things that make all the difference. There’s a phenomenon known as the Broken Windows theory. An experiment was conducted years ago about fixing up urban communities with high crime rates. Community members fixed windows, cleaned graffiti, and picked up trash across a certain areas. And in those areas the crime rates decreased. Now there’s more to this story, but there is a truth that paying attention to the small things can make as much of a difference as the big things.

Pulp Fiction is a movie with great characters, an interesting structure, a nod to movie nostalgia, but it’s not the “classic Hollywood” movie that usually gets nominated for best picture. The reason why it’s memorable is the attention to detail. The dialogue is filled with hilarious and clever lines about what a Big Mac is called in France and what “Marsellus Wallace looks like.” It’s in these small things that are done with so much care, that the real magic happens. And the same thing can be said about doing mitzvahs. The smallest thing can make all the difference.

One response to “Pulp Fiction and the Parsha — By Ben”