The Atlanta Falcons, Hillary Clinton, and La La Land walk into a bar. 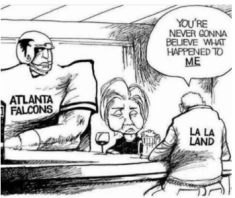 The Atlanta Falcons say, “I can’t believe it, 3rd quarter, we were up by 3 touch downs. Who knew? I’ll have a beer.”

Hillary Clinton replies, “That’s nothing. All the polls had me at 73% the night before the election, the NYT says it was a 99% certainty. I even had a 5 state firewall! I’ll have a top shelf margherita.”

La La Land interjects, “They said my name! I had the Oscar in my hand! I was mid speech! Then poof… gone! Pour me a double shot of Jack.”

Then a voice from across the bar chimes in. “You think you guys had it bad.” The man turns around. He’s nursing whisky straight from the bottle.

The three customers ask, “What happened to you?”

“The name’s Haman.” He takes another gulp and says. “Let’s just say, don’t piss off your best friends wife. Especially if she’s Jewish”

Haman was the ultimate non success story. He was on top of the world and was a hair’s breath away from everything he wanted.

✔️️ Become King’s right hand man earning his absolute trust.
✔️️ Become super rich.
✔️️ Get King to enact a decree that everyone should bow down to me.
✔️️ Devise plan to kill all the Jews via state-sanctioned Jew purge day. Get King to sign off on it.
✔️️ Construct grandiose gallows to hang Mordechai the Jew (who Haman hated more than anyone).
__Become more awesome, hang Mordechai, watch Jews die in blood bath.

Pride Comes Before the Fall

So imagine you’re having one of those days where you’re batting a 1,000. Then, say someone like your boss comes up to you, they ask you something… and you answer a little too cocky. Maybe you give that piece of unsolicited advice or you make that joke that crossed a line. Then you see it in their face… uh oh. You’ve gone too far.

That’s precisely what happens to Haman when King Ahasuerus comes up to him and asks “What should be done for the man whom the King especially wants to honor?”

To which the King immediately replies, “Okay. Do all that for Mordechai the Jew.”

You Said What Now?

This is the turning point for Haman. From here on out everything will crumble. He will have to embarrassingly escort Mordechai through the town on horse back. He’ll have to personally tend to Mordechai’s wants and needs for the day. Then he’ll arrive at a private meeting between him, the King, and Queen Esther where she will reveal that she is a Jew and the edict designed by Haman would kill her and all her family.  And finally in a final attempt to plead for salvation, Haman will trip and fall into Esther’s lap. To which the jealous King will interpret as a sign of assault and Haman will be hung on the very gallows he constructed for Mordechai.

My summary of events doesn’t do the Purim story justice. The details of how a personally trusted advisor to the king falls from grace are far more intricate and satisfying than I could lay out in this blog post. But the lesson to take away is that Haman had no idea what was going on beyond what he could see. He couldn’t have known Esther was a Jewish princess. He couldn’t have known that when King Ahasuerus asked him about honoring, that the King had been up all night, paranoid that there was going to be an assassination attempt. And most of all Haman couldn’t have known all his efforts to curry favor and build stability would be instantly forgotten.

Obviously we learn from this story, as well as recent history, that nothing is a sure thing. Our perspective is so limited despite the fact that we have more information than at any other point human history. So if you are driven to do something and you believe it is important, even the odds are stacked against you, don’t let that stop you. Your entire life can change on a dime.

And keep in mind this Purim, that once we as a nation lived in a time where there seemed like there was no hope what so ever of survival. Who knew we had a Queen in the palace?