Rabbi Elazar Ha-Kapar says, Kinah, Taivah, and Kavod drive a man out of the world.

Kinah is translated as envy or jealousy. Kavod is the pursuit of honor. Taivah is desire or lust. Not just sexual lust (though that’s a big part of it) but also cravings for food, compulsively checking your social media, obsessing over fantasy football stats, etc.

This leads to a binary mindset. When I’m eating cheeseburgers and when I’m not eating cheeseburgers. You might say, “Why don’t you just have a cheeseburger every once in a while and go back on track?” That might be good for some people, but unfortunately for me it doesn’t work like that. It’s either on or off, mindset A or mindset B.

For the last few years I’ve been trying to maximize the time I spend not eating cheeseburgers. First going a couple weeks, then going a few days more. Going without cheeseburgers for two weeks straight is now a regular thing and that’s certainly an accomplishment. Before Rosh Hashana, I managed to go almost a whole month, the longest I had ever gone.

Then came Passover, the time of our freedom. Determined to tap into the energy of this year’s Passover, I threw the last of my cheeseburgers into the fire at the chometz burning parking lot behind B’nei David. Then when I took my first bite of matzah, I imagined the freedom of living in “mindset A”. Did I think I was going to be free of my taivah forever? Probably not. But at that point I had a goal, to go the entire 7 weeks of the Omer cheeseburger free. I would use the counting of the Omer to raise myself up spiritually like the Jews in the desert. Then when I get to Shavous, I would have an amazing feeling of accomplishment in knowing that I ruled over my emotions, my emotions didn’t rule over me. And I would tie that to the receiving of the Torah. Who knows where I’d go from there?

Without going into too much detail of the struggle, I’ll just say I managed to go 5 weeks. Longer than I’ve ever managed to go in my life, but still 2 weeks shy of my goal. I can look at this as a failure or as an accomplishment. But maintaining a positive perspective isn’t why I wrote this blog post.

There is a realization that I’m never going to be free of my taivah. There are rabbis and speakers who will say that the Torah has the ability to change your nature. And to some degree I’m sure that is true. If it is, it is a life time of work and I don’t believe you can ever fully uproot the desire. However, Rambam has a more practical solution. In book two of his Mishneh Torah, the section on De’ot (character traits) he talks about how a person should identify what character trait is in fault (let’s say he’s indulgent). Then he should find the corresponding trait on the other end of the spectrum (so in this case it would be discipline or abstaining). But he shouldn’t just aim to be 100% abstinent. The degree he goes to the other side should match the degree of his problem. So let’s say the guy is pretty indulgent, but not a glutton, then he should be pretty disciplined, but shouldn’t go to the full extreme. The person is going to go back and forth, like a pendulum. That’s just human nature. But over time, the extremes are going to narrow until that pendulum swing is going to look more like a vibration. That’s balance.

And that’s what I’m shooting for.

But there’s no escaping that fact that when I am eating cheeseburgers, my connection to God is weaker. I don’t want to pray and when I do, I’m more likely to speed through my prayers. I’m less likely to be authentic in asking for what I want. Why bother? I don’t deserve it!

But then I remembered a teaching someone told me a while back. The first line of the first paragraph of the Shema reads, And you shall love the Lord, your God, with all your heart, with all your soul, with all your being/resources/might. But there’s an interesting thing about the Hebrew, the word heart is spelled לבבך, with a second ב. The word lav doesn’t normally have that second ב (bet). A teaching from the talmud says that because of the second bet, the word should be translated not as heart, but as hearts. Judaism recognizes that we have two aspects to our character, the yetzer hatov and the yetzer hara (the good inclination and the wicked inclination) and that both of these aspects should be devoted to loving God. I had known this teaching for years and it never really resonated with me. But when I went to pray just yesterday, as I was getting ready, feeling like it was more of an obligation than something I could connect with, I remembered the two hearts. And then, even though I was more identifying with this other mindset,  I was able to connect, both hearts, unified in prayer. 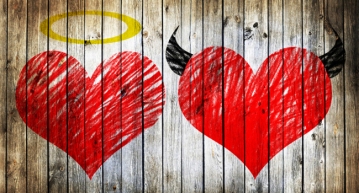 It was an interesting experience and a very different quality of prayer. It felt like the whole of me was invested. There wasn’t this resentful side of me dragging its feet resisting the process. Granted my concentration wasn’t perfect and I wasn’t able to pray with the full intention that I normally do. But despite that, I was fully at the table.

Though I’ve found some sense of balance, I still know it’s better for me to not eat cheeseburgers. I don’t know where I’ll be tomorrow, or at Shavuos, or next year during this time. But at least for now I know, when I fall, I don’t have to disengage so much anymore.