This week’s parsha starts out with the ultimate of ultimatums, will you choose blessing or curse? It’s very simple, just do all the commandments and you’ll get blessings. Easy stuff, right? This choice will be presented later in Devarim and further expounded upon. But the primary difference between here and later happens to be how it’s all introduced; with a single word (and name of the parsha) Re’eh. To see. What is the Torah alluding to with this word? 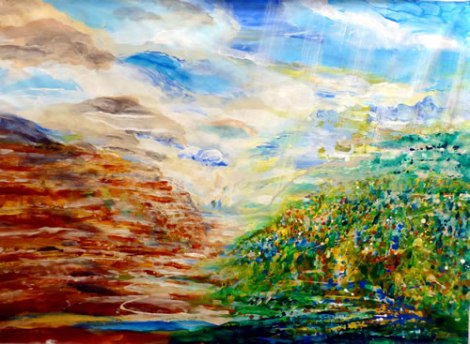 The immediate answer is that Moses instructs the Jewish people in a ceremony that they will perform just before entering Israel. Basically there are two mountains, Mount Gerizim and Mount Ebal. They’ll recite blessings atop one mountain and curses atop another. From that experience they’ll always be able to look to those mountains as a visual reminder of that choice. And to this day* you can see these almost identical mountains (almost being that one is lush and green while the other is barren and desolate) as a clear visual expression of blessing and curse.

Then the parsha jumps to talking about various mitzvahs. One might think that the Torah starts with this “seeing” idea, then drops it and moves on to other things. But if you look closely at these individual ideas, it is clear that they all reveal God and His blessings, each in a profound and unique way.

From the two mountains Moses then instructs the Jewish people of the future location of the Beis HaMikdash, the Temple where Hashem’s spirit will rest and miracles will be in plain sight. There is no easier way to see God in the world than at the holy Temple mount. It is truly a shame that we lack the Temple as the ability to feel God in a tangible way left the world with its destruction. 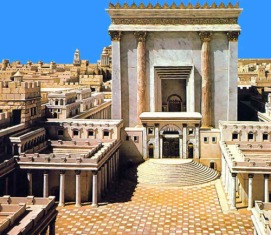 Then follows the commandments to destroy idolatrous citiesand prosecute a false prophet. These ones seem pretty harsh without context and I’m not going to try to justify them here. But I will say that these are two things that either distract, obstruct, or confuse our ability to connect with Hashem. One of the biggest problems we have today is people’s association of God and religion with the way the message has either been misunderstood or perverted for the sake of an agenda. There is no shortage of Jewish ideas that have been hijacked and misconstrued. However idolatry and the false prophet were tenfold worse than someone using mistranslations or out of context verses to preach hate and violence.

Beyond that, Moses hits tzadaka, tithing produce, and the shmitah year. Regardless of your religious level, any good person can get behind giving charity to the poor. When it is viewed from a religious perspective, the action clearly brings God’s mercy into the world. Tithing is an extension of that. When we view our earnings (crops, money, or otherwise) as not our own, but given to us from God, giving back 10% of those earnings not only makes sense, it’s imperative. Then the shmitah year (where loans are forgiven and slaves are set free) is an even bolder step.

Then the parsha ends with instructions about the 3 big holidays, Pesach, Shavous, and Sukkos which require pilgrimages to Jerusalem. A journey to Jerusalem is always an elevation of spirit, but to do so during the holiest days of the year super charges it.

One of These Things is not Like the Other

So while the mitzvahs above clearly reveal God and blessings, the parsha has a section reviewing the laws of kashrus. The mitzvahs of keeping kosher are known as chukim or laws that have no logical reason. Despite what you might have heard, we don’t keep kosher because it’s healthier. So how does this fit into the mold of revealing God?

The criteria for identifying kosher land animals requires two aspects. 1) The animal must chew its cud and 2) it must have split hooves. Now what is the most famous non kosher animal? The pig. And with this animal, it actually has one of the two criteria, split hooves. So one might think, “Hey this pig has one of the kosher signs, maybe it’s not as bad as other non kosher animals?” 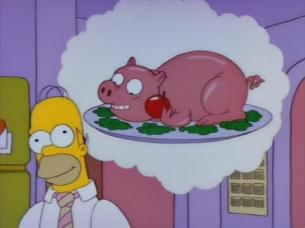 The rabbis say that is a trap. On the outside the animal looks kosher, but on the inside, it’s not. Now why would God make such a delicious animal not only forbidden to the Jews, but also appear kosher? It’s like God is teasing us. Surely it’s a curse! If you choose to look at it that way. But there are many ways to see it as a blessing (okay now you can use the health reason –achem- trichinosis).

God actually demonstrates this idea early on in the Torah. If we go all the way back to Bereishis (1:3-4), God has the famous line “‘Let there be light,’ and there was light.” But them immediately after, “God saw that the light was good.” Now why does God need to see the light was good? He didn’t know when He made light that it would be good? Of course not. According to the Ramban, the Torah is telling us that the way we choose to view things has an affect on the thing itself. We all know people who can’t help but be a pessimistic and see the worst in life. Where we’re inclined to write it off simply as a negative perspective, the Torah says, they’re actually inviting more curses upon themselves. And if the Torah’s examples isn’t enough for you, scientists have known for years that the observer changes the experiment.

So always remember that the way you choose to look at the world is the difference between blessing and curse. Granted you still have to keep the mitzvahs. But along that tremendously uphill journey of taking on those mitzvahs, you can either let those obstacles be an excuse to quit or an opportunity for reaching a higher level. It’s up to you.

*Just a heads up, there does happen to be a disagreement about which mountains are actually Mount Gerizim and Mount Ebal, but Rabbi Greiver swears he went to the authentic sight. At least that’s what his tour guide told him.