Imagine you go to the grocery store to pick up a bottle of wine for Shabbos dinner. You’re going to run in, grab the wine, and pay for it. You’ll be out just in enough time to beat rush hour traffic and get home to shower before candle lighting. Because you’re getting wine you can’t use the self checkout. And of course, the person in front of you has well beyond the “about 15 items” allowed in the express checkout. And of course they have a coupon. And of course the guacamole is ringing up at full price but the customer insists it’s on sale, so the clerk has to send the bag boy to aisle 7 to check. Finally, the customer decides to buy cigarettes and now you have to wait for the manager to come and unlock the plexiglass case behind customer service.

Finally you say, screw it, loudly plop down the bottle of wine, and leave in a verbal huff. Now of course you’re screwed. You don’t have the wine. You already don’t have time to shower. You know the Trader Joe’s is 10 minutes away and has even longer lines. But somehow you’re still satisfied even though you’ve lost. In the face of frustration and despair sometimes we do things that are counter productive. And this week’s Torah portion presents a scenario that is the very epitome of that despair. 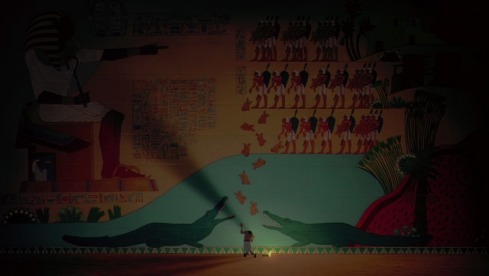 Pasha Shemos starts the second book of the Torah and with it the beginning of the Jewish people’s slavery in Egypt. If a life of hard labor weren’t enough, Pharaoh decrees that all Jewish male children upon birth be thrown into the Nile River. Such a bleak reality we might likely dismissed as an over dramatic legend if not for the horrors of the Holocaust still in recent memory. Immediately after Pharaoh gives the decree the Torah says the following;

A man of the house of Levi went and married a daughter of Levi. The woman conceived and bore a son. (Shemos 2:1-2)

And thus the story of Moses begins. But the odd thing is that we know Moses has an older brother and an older sister, Aaron and Miriam. Why does the Torah tell us that a man goes and marries a wife and then immediately has Moses?

From here a Midrash comes and fills in the gaps. Upon seeing the decree enacted, Amram (Moses’ father) decides to divorce his wife Yocheved. He can no longer see a point in having more kids just to see them die. And since Amram is one of the leaders of the Jewish people, his action ripples throughout the nation. As a result everyone else follows suit.

However Miriam will confront her father telling him that while Pharaoh has taken away the life of every boy, what he is doing is worse than Pharaoh. Because what he is doing deprives the life of every boy and girl.  (And as a side note, Pharaoh is depriving the boys of a life, but by being born they would still have a place in Olam Habah, the world to come. But Amram is depriving boys and girls of both life in this world and the next.) Amram takes to heart what Miriam says and remarries his wife.

The power of despair can be cataclysmic. So we will often do things that will only make the situation worse just to feel some sort of feeling of being in control again. How many of us have thought about quitting our jobs just because our boss infuriated us? But how much worse would having to find a new job be if we actually followed through with our impulse? However, Prime Minister of Israel, Golda Meir once put despair in much more profound terms. Pessimism is a luxury that a Jew can never allow himself.

Pessimism a luxury!? Who would ever compare such a depressing mindset to a luxury? But when you reflect on the nature of despair you come to realize that it is something you give into, something you indulge in. Why would anyone willingly wallow in such a destructive emotion? Because the truth is, the yetzer hara is always giving us reasons to quit and excuses to be lazy. To stay in the fight is exhausting. Failure can be debilitating, especially when we think we’ve given it our all. So when we allow ourselves to be blind to possibilities of success, it gives us permission to stop.

That’s where emunah comes in. The faith to keep going despite the odds being stacked against you. Had the people of Israel only looked at the odds in 1948, 1956, 1967, or any other time the surrounding countries launched an offensive, they probably would have given into despair and we wouldn’t have a modern homeland. History is made by people who identified a seemingly insurmountable problem and strived to fix it anyway. The power of optimism is not only essential to success, it is a powerful tool to inspire others. Just as Amram divorced Yocheved causing everyone to follow suit, so to when he changed his mind he inspired everyone to do the same.

And remember it is from Amram’s decision to continue during that terrible time that his son was not only born, not only survived the decree, but grew up to be Moses, the savior of the Jewish people and the greatest prophet to ever live.

One response to “The Luxury of Pessimism – Shemos — By Ben”