I had an English teacher in 9th grade who delighted in making fun of us in front of the whole class. I remember one time he knocked Yuriy Teslyar’s notebook off his desk onto the floor. When the papers didn’t spill out onto said floor, he ripped them out of the 3 ring binder then threw them back down, laughing the whole time. His name was Mr. Patterson and he was the best teacher I’ve ever had. 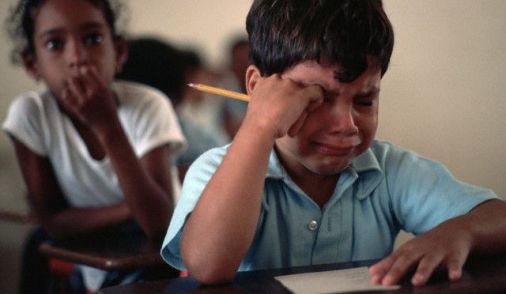 Sure the way I’m telling it makes him sound like the worst bully to be teaching sensitive Jr. High school students. But Mr. Patterson had the perfect understanding of the fine line between hilarious spectacle and actual offensiveness.  He was well aware of the students that could handle it and the students that couldn’t. When to be funny/mean and when to be serious. But the reason I bring up my old English teacher is because of something he once told me.

“I never get chosen for jury duty. I always tell them, I understand technicalities and how it can seem like someone is guilty but actually isn’t. However, if someone is guilty, I believe they should have the book thrown at them. They should get the full punishment of the law for that crime.” What Mr. Patterson was alluding to was the quality of mercy versus judgment. And those very attributes are featured in this weeks parsha.

What’s in a Name?

As you read through the Torah, you’ll notice that God has several names. If you’re reading a bad translation, you’ll only see “God” and “the Lord.” But a good translation will do it’s best to differentiate them. Parsha Va’eira actually starts with God speaking about some of these different names.

Elokim, spoke to Moses and said to him, “I am Hashem, I revealed Myself to Avraham, to Yitzchak, and to Yaakov, as Kel Shakkai, but My Name Hashem I did not make known to them. I also established My covenant with them, to give them the land of Canaan… (Shemos 6:2-4)

The names listed above have been changed because we avoid saying God’s name unless  in prayer or other special context. Why does God have different names? I’ve spoken before how in Hebrew, names invoke to the essence of a being. It’s impossible to understand God’s essence completely, so these names exist to refer to a particular aspect of God. We live by different names ourselves if you think about it. A person might be known to friends as Bobby, but professionally he might be known as Robert, or Mr. Smith. To his kids he’d be known as dad,  his wife might call him “honey” and to his college buddies he might be known by some embarrassing frat name. So different names act to reflect the different relationships in our lives. It’s the same with God.

If you read the creation story in Bereishis, God is explicitly referred to as Elokim. In the broadest sense, Elokim can be understood as the master of all powers. Elokim also refers to God in nature (since that’s what He was creating in Bereishis). There are rules of nature and if you do something there is a consequence. A hungry bear isn’t going to care if you got lost. He’s not going to give you a break, he’s going to eat you. Gravity doesn’t care you made a wrong turn on a mountain. It is objective and immutable. That’s the nature of justice. We get an immediate punishment with the precise measurement of that punishment (as Mr. Patterson seemed to think it should go).

It’s not until man comes into the picture that the Torah starts to refer to God as Hashem. And just to be clear, Hashem literally just means The Name. If you look in the Hebrew you’ll see His name spelled, י – ה – ו – ה. This is the holiest Name of God we know. If you say a blessing, it starts Baruch Ata…, the next word in that blessing is how we pronounce י – ה – ו – ה. (I’ve put hyphens because this Name of God is so holy we don’t even spell it. So I’ll continue to refer to it as Hashem.)

From this name of God, we get the quality of mercy or compassion. Hashem is how we know God via our relationship of the covenant. In a relationship we know the other party, we care about the other party. We understand that even though our partner may make mistakes, harsh punishment may not be the best consequence if we want to see growth. Yes you broke a rule, but you’ve been really trying hard to stick to the good path, is coming down on you really going to give you what you need?

Who needs Mercy and Who needs Judgment?

Why do the Jews get this name of God now?

To understand that, let’s look at Moses and Aaron. Moses pleaded to God last parsha that he couldn’t handle this task because he was of heavy mouth. So God gives him Aaron to speak for him. But there’s another reason why Aaron is brought in. Moses was what is known as an emmes or some one who up holds justice and truth. He would be the type of person who would give strong rebuke. But Aaron’s trait was chessed (kindness) and mercy. These two attributes mirror God’s attributes mentioned above for Elokim and Hashem. The Jewish people had been through the hell of slavery. How could Moses, a man who was a prince while the Jewish people suffered through back breaking labor then ran away for 40 years, give them harsh rebuke? Even if they deserved it, they would never listen to him. But they would listen to Aaron, a man who was with them the whole time, whose passion was seeking out peace and harmony. The Jewish people needed mercy and compassion. That’s why God is revealed to them as Hashem.

But Moses was the perfect person to deal with Pharaoh. Moses had lived as a prince, had personal experiences of what Pharaoh’s challenges were and what he had done wrong. And for a man like Pharaoh, it was time for swift and exact judgment.

Even though we most often refer to God as Hashem, it is important to recognize there is a balance between mercy and justice. Living in a world of pure justice allows for no mistakes, which means no learning from those mistakes and no growth. But if we live in a world of pure mercy, that’s a world of no consequence, where nothing is taken seriously. I find it best to act in the world as if there were consequence. But in our prayers and when talking to God, remember what י – ה – ו – ה means. And finally, remember that we live in a world of meeda keneged meeda or measure for measure. If we have mercy on others God will have mercy on us.