The Torah tells us not to be like Korach.

It doesn’t tell us not to be like the wicked prophet Bilam or Yaakov’s conniving uncle Lavan. It doesn’t even tell us to not be like Pharaoh who slaughtered babies and enslaved the Jewish people. But it singles out this one individual. Granted he lead a rebellion against Moses, but c’mon that’s not infanticide. What did he do that was so abhorrent?

To figure this out there are some oddities in the Torah portion which shed some light.

The first two clues are in the first line of the parsha.

Now as you were reading that quote you were probably thinking, Ben’s made one of his infamous typos again. But I assure you, the Torah quite clearly says “Korach took” and gives us no direct object. What’d he take? Money? Attention? Honor? Many translations will fill in something just to make the sentence make sense, but from the Hebrew, it’s only וַיִּקַּ֣ח קֹ֔רַח. Rashi gives some explanations but the next comment he makes on the line is the second clue.

In the listing of Korach’s lineage, it notes his father, his grandfather, and his great grandfather. But it doesn’t list the next up the family tree, Yaakov. The last clue comes at the end of the Torah portion. After wrapping up the whole rebellion and reestablishing Moses’s claim, the Torah continues on with the commandment to tithe (trumah and maser) from one’s income.

The Give and Take

Rabbi Jawary pointed out that these three ideas are connected to the theme of giving. The first line of the parsha doesn’t need to identify what Korach took, only that he was a taker. By listing it as the first and only attribute of Korach, the Torah is stressing this as his primary character trait. It would be one thing if Korach were not so well off, but he was one of the richest individuals of the generation. There’s even a Yiddish expression “rich as Korach.” But not only is Korach not satisfied with what he has, he turns around and accuses Moses and Aharon of being takers themselves in the effort to steal their positions. Cognitive dissonance and hypocrisy know no bound.

Then we have the removal of Yaakov from Korach’s lineage. Why? One of Yaakov’s primary character traits was giving. Way back in Bereshis, when Yaakov has the dream about the angels on the ladder, he realizes he’s at the holiest place on earth (the foundation stone) and makes the following bargain with God.

And Yaakov uttered a vow, saying, “If God will be with me, and He will guard me on this way, upon which I am going, and He will give me bread to eat and a garment to wear; And if I return in peace to my father’s house, and the Lord will be my God; Then this stone, which I have placed as a monument, shall be a House of God, and everything that You give me, I will surely tithe to You. (Bereishis 28:20-22)

The verse about Korach’s lineage omits Yaakov because this defining trait was completely absent from Korach’s character. So finally the parsha ends with God’s commandment for us to do what Yaakov vowed, tithe from our portion as a rectification for the calamity caused by Korach’s greed. 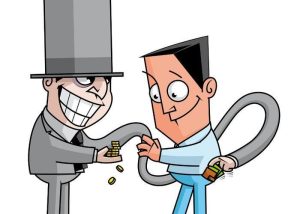 I talked about givers vs takers back in Vayeira. But there I was referring to people who give hospitality in a way that’s actually selfish. The way Korach takes is much more of a destructive side of it. In Rabbi Eliyahu Eliezer Dessler book Strive for Truth, he explores the nature of a giver vs a taker. In his writings he talks about how people are inherently one or the other.

If the taker doesn’t work on emboldening their giving side, their trait will grow and grow until they feel everything in the world is owed to them. Such a mindset leads to brutal competition, joy when others fail, and Rev Dessler even goes as far to say that this drive is the root of all evil. Though you may see a taker give on occasion, rest assured their giving is only in the pursuit of the ability to take more.

On the other hand, one who identifies with being a giver lives with gratitude, feeling nothing is owed to them and anything they do take is a debt that should be paid back. When they take, it is only because it allows them to give more. It’s from that desire to give that they are most in touch with God as that is considered Hashem’s primary attribute. But with any character trait there is always an unhealthy extreme as a giver who gives too much can end up not being able to sustain themselves.

Yaakov is referred to as the greatest model for giving because he was also known for the trait of healthy balance, tiferes. His way of giving back had a limit, a tithe. Ten percent (or up to 20% if you really want to push it.) And that’s why the Torah portion ends with that commandment.

To give ten percent of your income can be a scary thing, especially if you don’t know when or where your next paycheck is coming. So you don’t have to give money, you can give time, or attention. But some of the best opportunities of my life have come from helping someone when I thought I didn’t have the time or the money. Ultimately, the act of giving is about being able to trust in God. It’s that quality of emmunah, that allows you to let go a little when things seem their worst and take a breath. And from that calm, comes an attractiveness that opens the doors for opportunity. The alternative may lead you deeper and deeper in to a hole you may never get out of. Kinda like Korach.

One response to “Korach Took — By Ben”