The first goal I remember from childhood was my resolve to speak, read, and write every language on earth, so that I would never come across a symbol that I couldn’t understand. When I got a little older, and realized that there are over 6,500 languages, I decided to master the languages of my ancestors first, and then tackle all the others later on.

But my education in Hebrew didn’t truly begin until at the age of 11, when I had to study for my bat mitzvah. From my first glance at the Aleph Bet, I was hooked. I worked hard with my teacher to make up for lost time, learning the squiggles and angles and curves of the Hebrew letters, and how to distinguish the dots and dashes of the vowels from the tiny symbols of the cantillation marks, so that I could read and understand the texts of the Torah before the big day.

As I learned more, I began to notice unusual Hebrew letters in the Torah. Some letters were noticeably larger or smaller than others, and there were even letters which stood backwards in the Torah scroll. (They are rare, but if you look for them, they’ll find you.)

I wanted to know: Why were these letters written differently from the others? What did they mean? Explanations were as rare as the letters themselves and often there were none. If I was lucky I’d find mere one-liners in the footnotes of my Chumash (Five Books of Moses). I knew there must be more to the mystery of these maverick letters, but as a teenager I had absolutely no idea where to look.

Fast forward a decade, when I was halfway through my master’s degree in Jewish Art. I took a trip to Germany in 2013 and traveled to the ancient town of Worms, which in its heyday was one of the largest centers of Medieval European Jewry.

On a chilly day in January, we visited the Rashi Synagogue and adjoining museum. In the museum, I spied a Torah scroll laid out, open, under glass. It was much larger than an average Torah, its words clear and sharp. My heart broke when I saw that the bottom of the parchment had been torn off (this happened during Kristallnacht, according to the wall label), though the scroll had miraculously survived the Holocaust.

Then I saw it: a strange letter in the middle of a block of text, in the word HaMishpatim, ‘the laws’. It was a Pei פ (the seventeenth letter of the Aleph Bet) with a large whorl inside its mouth. Of all the unusual letters I’d come across, I had never seen anything like this. The Spiral Pei appeared again a few lines below the first, on a similar word. My heart raced.

Do you see them? The two spiral letters?

I couldn’t comprehend what I was seeing. I had never learned anything about another version of the Pei, and this could have been unique. But something deep in me refused to believe that this was merely a beautiful scribal flourish. I asked the guide about it, then the group of rabbis-in-training on my tour, but they all just told me “That’s a Pei.” I even took a breath and approached a knot of Orthodox men in black and white attire, asking them—in Yiddish—to look at the letter. To my relief, one of them agreed to take a look.

“Vos iz dos?”  I asked, and pointed at the letter. What is this?

“’Ciz a Pei”, the bearded man replied, with a quizzical look. It’s a Pei.

“Yoh, ober forvos iz der Pei angeboygen?” I tried again. Yes, but why is the Pei bent around?

He looked down at the letter for a moment, frowned, then shrugged and turned away.

No one in the museum could help me. But I knew this strange letter had special meaning hidden within it, and I was determined to unwrap it.

When I returned to Los Angeles, I approached numerous rabbis and Jewish scholars, but yet again, I was obstructed by intellectual apathy. After two fruitless years, I was about to give up, until one experience changed everything.

On Shabbat morning of Parshat Pinchas, I attended a pre-service lecture by a rabbi who spoke about a single letter in the Torah scroll for a full hour: the broken vav, or vav ketiyah, in the phrase “Brit Shalom” (Bamidbar 25:12).

The severed vav represents the broken peace that Pinchas achieved through violence.

I approached the rabbi after his lecture to ask, “What area of knowledge is this?”

Masorah usually refers the unbroken continuum of students and teachers traced all the way back to Sinai, aka the chain of transmission. But what the rabbi referred to was a system of notes and signs used to read the Torah, and designed to preserve the TaNaKh (Hebrew Bible), and the way it is written, from change. Essentially, Masorah is a quality assurance system for the integrity of the Torah.

I had to know more.

What followed was an independent study with that rabbi. Slowly, I began to grasp the vast ocean that is Masorah. As my studies continued I learned that, according to Jewish tradition, not even a single letter can be added or subtracted from the Torah. If this were to happen, the entire Torah would be unkosher—rendering that scroll unfit for ritual use. 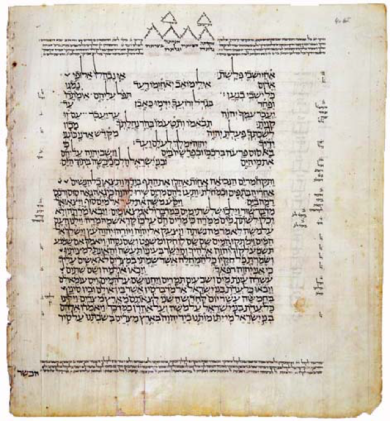 Page from The Leningrad Codex: a text that has Masoretic notes all around the margins.

The rabbi taught me that the bizarre letters I had noticed for much of my life were called Otiot Meshunot. Literally ‘strange’ or ‘unusual letters’.

Together, we learned that the Spiral Pei has two names: Pei Lefufah or Wrapped Pei, and Pei Kefulah or Doubled Pei. It was the rabbi who pointed out that the Pei I had seen in Germany wasn’t exactly a spiral…it was a doubled Pei, namely a Pei within a Pei!

A Bolt from the Blue

While the Masoretic texts gave this Doubled Pei a name (or two), and even indicated exactly where they should appear in the Torah (Sefer Tagin lists 191 occurrences in the Chumash alone), they did not explain why they occur. The deeper meaning, the thing that I craved most, still eluded me.

The rabbi directed me to Sefer Tagin, Minchat Shai, and the commentary of the Baal HaTurim (Rabbi Jacob ben Asher c.1269-1343). For my midsummer birthday, my family purchased me a complete edition of the Baal HaTurim, and when it arrived, I pulled one of the volumes out of the case and opened the book at random. The diagram that looked up at me from the page stopped me cold.

Upon seeing the strange and beautiful Pei printed with paragraphs of explanation beneath it, I burst into tears—distressing my confused family. The intense, burning curiosity and ardent hope that I would someday discover the meaning of this mystery-letter had been released in an instant. All at once, over three years after seeing the wrapped up letter for the first time, I could finally understand it.

The Baal HaTurim explains that this unusual Pei, which he refers to as the Pei Kefulah (Doubled Pei), teaches us specific lessons each time it appears in the text. This letter represents many things, including themes of delving deeply and doubling. A few examples:

(Devarim 7:12) This Pei Kefulah [on HaMishpatim, ‘these laws’] indicates that it is necessary for a judge to probe and to investigate in order to arrive at the depths of the law. The judge must understand that each testimony is doubled; there are two sides to every story.

(Devarim 15:8) This Pei Kefulah [on phato’ach, ‘open thy hand’] indicates that you who are giving money to another should open, not only your hand, but also your mouth, and speak reassuring words to the recipient (this is a play on words: Peh literally means ‘mouth’).

The Baal HaTurim comments on no less than 13 occurrences of the Pei Kefulah. But what of the other 170+ times it appears in an old Torah scroll? My quest of discovery was not over.

But to make matters worse, I’ve discovered from more than one scribe that Doubled Pei’s are not only left out of new Torah scrolls and mostly forgotten, but Doubled Pei’s are actually being erased from old Torah scrolls by scribes and are then replaced by normal Pei’s. This may be because scribes, ignorant of the Masoretic tradition, believe that these weird spiral letters are unkosher. But before now, countless scribes have faithfully copied this idiosyncratic curly letter for millennia. Even the great Rambam (Rabbi Moshe ben Maimon, c.1137-1204) himself wrote that the Wrapped Pei was ancient and must be protected, and yet this strange and wonderful Hebrew letter is now endangered.

In a way, I feel as if the Spiral-Doubled-Pei called out to me personally. It cried out from a torn Torah in a cold museum vitrine where no one else was listening. The mouth of the Pei spoke, saying,

Remember me! Open up and unwrap the meaning within me.

As an artist, scholar, writer, researcher, and daughter of Israel, I feel obliged to delve into the whorls of the Pei Kefulah and deeply understand them—not only for myself—but to share them with others, lest this remarkable letter disappear completely.

If you have any information about Spiral Peis please contact us. Check out more posts like this at Devorah Learns Masorah.

6 responses to “The Mystery of the Wrapped Pei — By Devorah”