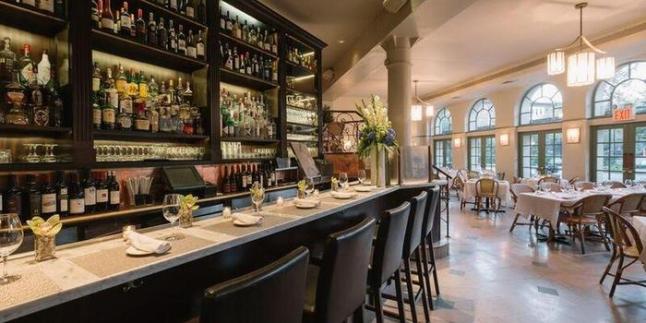 When I lived in Manhattan I had this job at a restaurant near the Natural History Museum. The management was abusive, the tips were abysmal, the brunch shift was a chaotic nightmare, and since it was such a terrible job they couldn’t hold on to anyone so you were stuck working 6-8 shifts a week. I remember rolling bus tubs of silverware into napkins while on my knees in the locker room wearing sweaty plastic gloves after a double shift.

For most of you, what I should have done was obvious, quit! But I had just moved to New York and needed money. I had worked hard jobs before and had grown because of them. In doing so I rose to higher positions where I reaped the benefits. Also, the restaurant was struggling and I didn’t want to abandon my friends when things were at their most difficult.

But one day the New York Marathon would be running right by the restaurant, so the servers had to set up this tented structure near the street to capitalize on the opportunity. Big surprise, things did not run smoothly. The computers didn’t work, the support staff didn’t know the new table numbers, and running into the restaurant all the way to the bar to get cocktails was a nightmare. And of course, because the servers had to set up and break down the tent, they made much less money than the servers in the restaurant who got to keep taking new tables.

When I voiced my opinions about the day to my manager she responded, “We do this every year, you should have expected the hard work.” To which I responded, “If we do this every year, why were there so many failings in the system?” It was at that point I realized that this restaurant had no ability to pull itself out of its disfunction and that it was time for me to go. Sooner or later we just have to see things for what they are.

In this week’s parsha, Toldos, Yitzchok has to make a similar realization about one of his sons. The famous twins Yaakov and Esav are to be the new generation that will produce the Jewish people. Yaakov will have dominion over the spiritual matters while Esav will be the master of physical and earthly ones. It was to be a partnership which would ensure balance. But Esav was seduced by the physical and desired things like avodah zara (idolatry), women of ill repute, murder, and more.

Despite this, Yitzchok still wished to give Esav a blessing for wealth, abundance, and dominance over the nations of the world. Just a note; when a man of Yitzchok’s holy status gives you a blessing, it’s going to come true. But when Rivkah, Yitzchok’s wife and mother to the twin boys, hears this, she has to put a stop to it. She dresses Yaakov up like Esav and has him steal the blessing. Then when Esav comes to his father to get his blessing, Yitzchok is shaken when he realizes he was deceived by Yaakov. But instead of writing the wrong, he basically says, “Too bad, I gave the blessing to your brother. Can’t do anything about that now.”

This scenario brings up a lot of questions. Is it okay to deceive someone if you think they are wrong? Why did Yitzchok want to give such a blessing to his son if he was involved in such depravity? And once Yitzchok realizes the mixup, why doesn’t he fix it? I’m sure I could go on about each of these questions at length, but to cut to the chase, I believe the core of it all centers around the same idea as me at the restaurant. Seeing things for what they are. 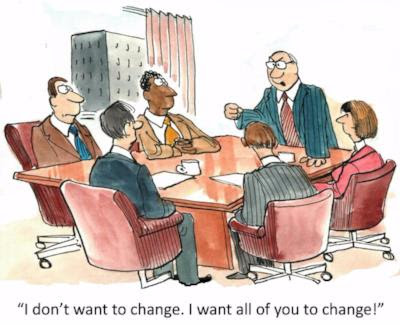 Yitzchok was well aware of his older son’s failings. But despite that he believed if he could give him the proper chance Esav would right himself out and fly right. He would do this with the blessing. It’s from here we see how futile it is to try to change a person. We may expend years of effort trying to nag, chastise, and plead with our closest friends and family members to change. And all that effort will likely be for naught. As the old psychology joke goes…

How many therapists does it take to change a light bulb?
One, but the light bulb has to want to change.

If we really want to change the world, the energy would be better spent on ourselves. As the monumental Rabbi, the Chofetz Chaim once said…

‘I set out to try to change the world, but I failed. So I decided to scale back my efforts and only try to influence the Jewish community of Poland, but I failed there to. So I targeted the community in my hometown, but achieved no greater success. Then I gave all my effort to changing my own family, and failed with that as well. Finally, I decided to change myself, and that’s how I had such an impact on the Jewish world.’”

It’s not that Yitzchok won’t give Esav the blessing because it has been stolen. Blessings don’t work like that. If you are holding an apple but you say “hamotzei lechem min haaretz” (the prayer for bread), did you bless that apple? Of course not! Blessings (or brachas) require intention. If Yitzchok didn’t intend to bless Yaakov, it doesn’t matter if he was masquerading as his brother or not. The reason why Yitzchok won’t give Esav his blessing anymore is because he finally realizes who really cares about the mission of the Jewish people.

The realization is so profound that the Torah says Yitzchok “was seized with a powerful trembling” (Bereishis 27:33). What was this realization? That Yitzchok has been living a life mission in error. Imagine that you suddenly face that the primary goal of your life is completely wrong. Years of effort, thousands of decisions, choices that have affected other people, all for nothing! How could that not dismantle you? Rashi compares the moment to, “Seeing Gehinom (hell) open beneath him.” But Yitzchok realizes his mistake and reaffirms his blessing on Yaakov. It is a testament to Yitzchok’s humility and commitment to do what’s right.

We live in a world that is getting harder and harder to identify the truth. I actually think we’re at a point where even confronted with undeniable facts people will shrug it off and continue living their lives just the same. But it is commanded of us that we always search out truth, reconfirm it, and live our lives according to it. Especially when we have to face the truths that are uncomfortable and even foundation shattering. But it is from those efforts we gain clarity which breaks the paralysis of inaction. May we always be able to face such difficult truths and act because of them.