In fact, we have often been ridiculed for being “chosen.” It is actually something held against us, and the basis for a great deal of hate and anti-Semitism. Yet, as I have written before, being a Jew means an active choice, an active choosing. Hashem chose us, but we agreed to choose back. We agreed to accept the Torah and the mitzvot and everything else. We agreed to behave in a certain and specific way. Some of us choose more, and I wrestle with this often. Choosing it all, at least for me, is not easy.

I know that what I do is between me and G-d, and while I want to set a good example and lead by doing… lead in my behavior… I need to resolve a push back I feel in regards to really taking on certain things.

A few weeks ago a group of us, alums from the last few JMI/Aish trips to Israel, had the pleasure of meeting Paul Cohen, a top sports agent, observant Jew and dedicated donor to so many amazing Jewish causes.

He said it quite simply, “Either you believe G-d is in control of the world, or you don’t.” And depending on where you fall, you act accordingly. This shook me to my core. I believe this, and yet, am I doing all I can and should be doing to support this?

I had a similar feeling when our group went into the Mea Shearim in Jerusalem. While the Haredi are not without controversy, I was overwhelmed with emotions as we entered what is one of the oldest Jewish neighborhoods in Israel. I felt as though I was in a time warp, in another world, and this brought on a great deal of guilt and confusion. These people, not me, are carrying on the traditions and the culture of Judaism. They are, for the most part, living by the letter of the law, Jewish law, and I am not. They are as close to authentic as you can get. I am not. 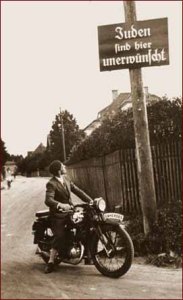 And yet, if G-d is in control why is Anti-Semitism so dramatically on the rise?

Just today, a BBC headline reads: “Anti-Semitism Pervades European Life, Says EU Report.
“Hundreds of Jews questioned by the EU’s Fundamental Rights Agency said they had experienced a physical, anti-Semitic attack in the past year, while 28% said they had been harassed.

France is identified as having the biggest problem with anti-Semitism.

On the day the report was released, the Italian police said they were investigating the theft of 20 memorial plaques commemorating the Holocaust.”

According to an article in the NYT, “The Anti-Defamation League logged a 57 percent rise in anti-Semitic incidents in the United States in 2017, compared to the previous year — including bomb threats, assaults, vandalism, and anti-Semitic posters and literature found on college campuses.”

I wish I could find this image, and I knew I should have captured it, but I just saw an amazing photo of a menorah on top of a pile of books, each one listed a historical event like the Holocaust, the Pogroms, or The Inquisition where they tried to wipe us out… but we are still standing… the Menorah is still shining and burning… and literally on top of all of these events.

So there is great hope… We have and will survive… But I struggle with this irrational hate daily. I post incidents and events to make people aware of what is going on, and to make sure we are all paying attention. Is it enough? Am I being Jewish enough?

I write this blog with Ben, to journal my journey, and share my struggles and triumphs. Is it enough? Am I being Jewish enough?

Ironically, being a Jew is defined by literally and metaphorically wrestling with G-d… wrestling with ourselves and our choices. Not to even remotely compare myself to the great scholars and forefathers, but I am in good company. Is it enough? Am I being Jewish enough?

Each year, for Rosh Hashanah and Yom Kippur and the non-Jewish New Year I vow to do better. I have missed out on some goals and “resolutions” and know I have along way to go. Is it enough? Am I being Jewish enough?

I do not know the answer, but I do know I have been chosen for a reason. I do know I have chosen back for a reason. I do know, from all of the lessons I have learned thus far, that for me, being Jewish means, above and beyond anything else, to always… ALWAYS do the right thing… not the easy thing or even the nice thing… but the right thing. So in that, I suppose I am close… still a long way to go, but close.

Being Jewish is the trying and the struggle, the doing and the wrestling, the talking and the praying… the holding on to faith and belief and letting it grow daily. To handle the tests and come through them stronger. To find meaning in existence and to live a fulfilled life. Since we are truly souls in bodies, my job, my path, is to let that soul shine, to connect it with others, and to brighten the world with light… soul light. To say “Hineni,” “Here I Am” and to know that I am as G-d made me, and I am enough. I have been Chosen and I also Choose. To me, this is what it means to be a Jew. I am a Jew.