A special thanks to Rabbi Avi Rabin and the JLI Course for this wisdom.

If you have not seen The Farewell, I highly recommend the film. Aside from it being poignant and beautiful on its own, it is a reminder of how we are all basically the same in terms of how we interact with family and loved ones, and in what we all want out of life.

To live a life filled with meaning and purpose is key. To know that we have left an imprint on the world is the desire, but more and perhaps most importantly, it is to leave an imprint on others… to know we loved and were loved.

This seems simple and easily attainable, but as we all know the world can be a challenging place, and life can get in the way of our most basic desires. And yes, bad things can happen to good people. In the current JLI course I am taking, the goal is to get the tools to deal with this and to try to maintain happiness, whatever that means. This will be different for everyone, but at least for me, I define it as a sense of calm and enjoy… being fully present in the moment and content with where I am. Of course, as I write this, I also realize how far away from it I am.

So how do we elevate?

Last night we discussed two famous stories. The first was the one where Rabbi Akiva went to a town and could not find a place to stay, and in the middle of the night, as he slept in a field, he lost his rooster, donkey and candle. At the moment it was happening, he knew it was not a good situation, but was able to say “whatever G-d does if for the best.” In other words, it may not be good now, but it will be, or prove itself to be good. When the town was raided and everyone was taken prisoner except for him, he was able to see that good. But yes, this came AFTER the fact.

The second story was about Nachum Ish Gam Zu, and I have to admit, hearing that someone was even more elevated than Rabbi Akiva surprised me… but in his story, with the chest of jewels and precious stones that were going to be brought to the Caesar, and were subsequently stolen by an innkeeper in the middle of the night, and replaced with soil… he KNEW IMMEDIATELY that what could easily be perceived as a horrible situation, was good. “Gam zu letovah,” he said… “This also is for the good.”

Of course it took a bit of a miracle and the presence of Elijah the Prophet convincing the Caesar that the soil had mystical powers, but he was rewarded more because of giving over a chest filled with dirt, than perhaps he would have been if he had actually delivered the jewels. His faith and trust literally saved him.

I am so far away from either of these of these abilities, but of course, I wish I could embrace either one. And at times, fleeting times that are few and far between, I can be this philosophical and engage this much faith. But to do this 24/7, to fully live and embody this… to have it be an integral part of who you are, and to always be able to whistle and sing: “Always look on the bright side of life”… wow… “Tis a consumption devoutly to be wished…” 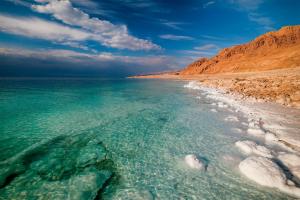 So in order to rise, we need to go deep.

Things that are deeper are often not seen on the surface. This is why Hashem is so often concealed. We need to dig down deep, into the level of the soul, in order to be elevated. I remember when we were at the Dead Sea, the lowest point on earth, and I had a revelation, that while this was as far away from ascension as you can get, you can literally only go up from here, you can only ascend. And that ascension, at least from here, was limitless. It IS limitless!

So as we struggle, as we fight, as we battle, let us all try to dig a little deeper… get into our very souls, and fly… soar… and elevate. From the very depths, let us rise.