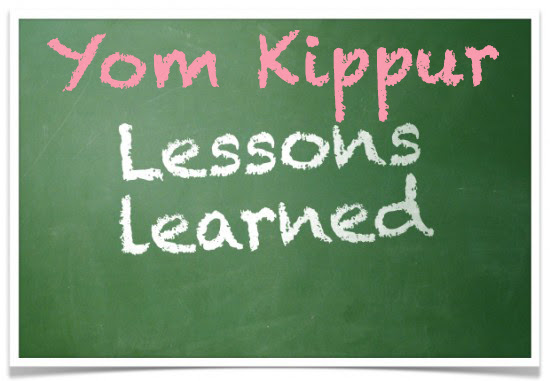 With the craziness of the holidays (aka chagim), very often things on the Jewish schedule come to a halt. Classes are put on hiatus, work is nearly impossible to accomplish, and so on. I took last week off and even thought yesterday was YomKippur, I thought it would be good to push through the holiday haze and get out a post. But rather than turn out my usual proposing of an idea and then talking about it, I am going to do short snippets of things I learned or experienced this YomKippur. Enjoy!

You’ve probably heard the term teshuvah over and over again this holiday season. Do teshuvah! Steps of teshuvah. Teshuvah this, teshuvah that. Teshuvah gemora, baal teshuvah. It’s the theme of the day and if you want some details check out my Yom Kippur blog post from last year. But what does teshuvah really mean? Repentance? Confession? Redemption? In some ways, yes to all those, but a simpler and more exact translation of the word teshvuah means to RETURN. Return to yourself.

If you grew up in the 90’s, there’s no way Engima’s song didn’t just pop into your head. But essentially that’s the idea. That we have a truest version of ourselves, a version of that works at the level we know we’re capable of working at. Being kind in the most sincere way, being the mensch we all know we can be. Through teshuva we can return to that. Because when it comes to judgment, can you be judged on something you couldn’t do? Of course not. You’re judged on the things you were totally capable of and missed out on. Because you weren’t being true to yourself.

Throughout Rosh Hashana you end up hearing 100 shofar blasts. But the actual number you are at minimum supposed to hear are 9 (see below). The main sounds you have to hear are Shevarim, Teruah, and Shevarim-Teruah and the Tekiahsact as a sort of book end.

As far as significance when it comes to numbers in Judiasm, 7 represents the whole of creation (7 days), 8 represents supernatural/miracles (hence why Chanukah is 8 nights), and 10 represents Godliness (10 sephirot, 10 spiritual levels, etc). But what’s with 9? There’s nothing special about 9. But then Rabbi Shlomo Seidenfeld pointed out something incredible. 9 is the only number that when you multiple it by any other number, the result added together equals 9.

The nine blasts of the shofar are a reinforcement of the theme above, return!

I’m never going to do it again. C’mon, really?

Another part of the teshuvah process is that you are supposed to say you’ll never do that sin again. And we can certainly be sorry we did those things, but deep down we know we’re going to go off our diets and we know we’re going to get angry again. It’s almost impossible not to. So how could you possibly say in all sincerity, I did X and I’m never going to do it again? And to answer that Rabbi Moshe Cohen gave an incredible idea.

The power of teshuvah is such that all the times we did that sin before are wiped away. It’s as if we’re a new person in the eyes of God. All that history you have as a person who struggles with X sin are gone. So though it’s probably true you are going to get angry again or miss an opportunity to give tzedakah, when you do make that mistake again, it’s like you’re doing it for the first time. And that mindset of “Oh, I’m a person who struggles with my anger” is worlds different from, “This is the first time I’ve ever snapped at anyone, why don’t I not start today?”

The Teshuvah I did.

I definitely could have reached out to more people and done more teshuvah this Yom Kippur. But for the few times I actually did reach out to someone to make an authentic plea, some amazing things did happen. One in particular I’ll share.

There is one family I am close with and they always host me for meals. Even when they are “officially not hosting” they’ll host me.  But when I’m over sometimes I may not be the perfect Shabbos guest. Perhaps the woman of the house, we’ll call her Rivka, asks me to set the table for her. My immediate response should be “Absolutely! You’re giving me free food which you’ve slaved over.” But it isn’t. And sometimes dinner doesn’t always go according to schedule and I can get… antsy (I’m a huge stickler for time.)

So I sat Rivka down and said, “You’ve always graciously hosted me, bent over backwards to always make space for me. I know I’m not always the perfect guest. Please forgive me for x,y, and z (of course I went into specifics here.) And of course Rivka responded with, “Don’t worry, It’s never bothered me, you’re always welcome in our home, etc.” And that would have been a great moment in and of itself. But then Rivka said something else. “But now that you mention it, though I’m always happy to host you, and this doesn’t only apply to you, but when people text me or message me for a meal, it would be nice to get a ‘Hi how are you doing?’ before immediately asking ‘Are you hosting this week?’ Sometimes it makes me feel like a catering service.”

I had no idea she felt this way. Of course I immediately apologized and swore never to do it again. Now Rivka wasn’t resentful or bitter or angry. It did bother her, but she is such a warm, happy, nurturing, giving person, that she would have NEVER expressed these feelings on her own. It was through the act of teshuvah, that I was able to give her the opportunity to express her feelings without me taking it personally or being awkward.  So in addition to making right the things we do wrong, teshuvah creates the place and time to hear things we might not even realize we’re doing wrong.

Those were the things that stuck out to me. But now that we’ve made it through the Day of Atonement, the work of judgment and the teshuvah are behind us as we can now embrace the joyful 2nd half of the season. Sukkos, Shimni Atzeres, and Simchat Torah.