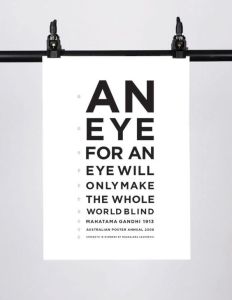 In Finland, it’s possible to get a speeding ticket for hundreds of thousands of dollars… if you’re rich. That’s because in most Scandinavian countries, a person’s income is factored into the price of the ticket. On one hand it seems like a profound injustice to have two people get different penalties for the same crime. But if a monetary penalty is supposed to function as a deterrent, wouldn’t a fixed fine inherently be less of a deterrent to a rich person compared to a poor person? (Not to mention the cost of legal council and biases already in the system.) If time is money and you’ve got a meeting where you’re going  to make a million dollars, and you can’t find a spot… why would you care if you get a $350 ticket for parking in a handicapped space?

If you look in this week’s Torah portion, Mishpatim, we get the infamous “eye for an eye”, verse. For centuries, people have interpreted this line as a justification for revenge. Gandhi is quoted as saying, “An eye for an eye makes the whole world blind.” It’s hard not to look at this line and not want to believe the Torah was written for an archaic and barbaric society.

But the Oral Tradition, the essential component to understanding the written text, maintains that this is a metaphor for financial compensation. How do we know this? The text seems quite explicit.

How is someone supposed to read that and come to any other conclusion than that the Torah prescribes corporal punishment?

As usual, it helps to get a sense of context. Merely a few verses earlier the Torah says the following,

…if men quarrel, and one strikes the other with a stone or with a fist, and he does not die but is confined to [his] bed, if he gets up and walks about outside on his support, the assailant shall be cleared; he shall give only [payment] for his [enforced] idleness, and he shall provide for his cure.

If we are to believe the Torah demands strict justice, why in this example wouldn’t the assailant not have to be beaten himself? Shouldn’t he feel the pain and anguish of the victim?  No, because the Torah is setting up the principle first that it is the assailant’s duty to make right, but that can be done through monetary means. That way, when we get to the “eye for an eye” verse, we already understand what we’re talking about is value, not physical retribution.

In fact, when it came a Jewish court, they only administered two forms of physical punishment; the death penalty (which was very rare) and lashes. Nowhere did they ever sentence with losses of limbs or organs.

It’s also important for us to look at the word “for” in the verse. The Hebrew word is תַּ֣חַת or tachas, which means, “in the place of.” If you’re trying to replace someone’s missing eye, it would make a lot more sense to pay them than for you to have your eye gouged out. But you might be thinking, no amount of money could ever replace someone’s eye sight. And you’d be right. Which is one of the explanations of why it’s listed in the Torah as “an eye in the place of an eye” instead of “monetary compensation for an eye.” Rambam comments that when it comes to the Heavenly scales, ” the perpetrator deserves to lose his own eye, and for this reason cannot find total atonement for his sin merely by making the required monetary payments. ” But there’s only so much a human court can do to make things right.

Another interesting notion that the Vilna Goan points out is that an the word תַּ֣חַת also means underneath.  If you look at the Hebrew alphabet the letters that immediately follow עַ֔יִן (eye) spell the word כסף (money). Just one of the many astounding deeper secrets of the Torah to tell at the Shabbos table. 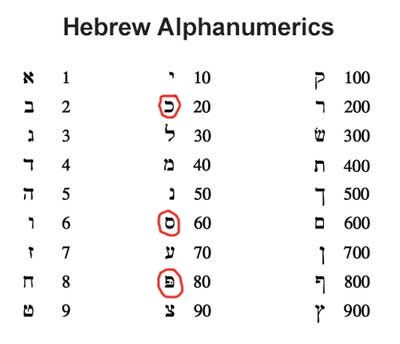 Whether Finland’s way of dispensing traffic fines is just or practical is a debate for their government. But there’s is an obvious connection between the level of fairness they’re trying to achieve and what the Torah is prescribing. We live in a world where companies are able to break laws and make billions and only suffer the penalty of a mere fraction of that profit. And to that, the Torah says no. To take someone’s livelihood, skill, or ability, either through negligence or malice,  demands that guilty party understand the full extent of their damages. What does your eye mean to you? Because only when we can see ourselves in the burdens of other, can we have compassion and empathy. So yes, eye for an eye is certainly justice.  But we must remember, it’s not about revenge. It’s about making things right.