Here is an opinion article on the situation from today’s Haaretz.

I am not sure if he came up with it, but I will credit Howard Hirsch with the “Never Again Is Now” phrase, since one of his posts was the first time I saw it.

And while I dread to get political on this blog site, I will call a few things out as I see them, because I feel it is imperative to not only see things as they are, but to share and speak them out loud. I encourage a discourse and dialogue on this topic with anyone, and only ask that we keep things civilized and logical and as factual as possible.

The uptick in anti-Semitism around the world has been noticeable for the last few years. There is no denying that. With extreme groups who call for the destruction of Israel, we have seen incident after incident that targets Jews specifically… or who includes Jews as a major part of their plots.

However, we also see it on the official state level, with countries like Iran and governments like Hamas. Their rhetoric is a dangerous call to arms, and unfortunately, many answer the call… especially when their families are rewarded and celebrated for a “successful” attack.

In this country, we witnessed one of the most brutal and depressing elections of all time. I know families who are broken apart because of it, friends who are no longer speaking… I saw two guys almost come to blows at my local gym, all because of who now sits in the White House.

Is our current President a racist and anti-Semite? I cannot answer that, because I do not know for myself. However, I can say with absolute certainty that he did use anti-Semitic rhetoric way too often, and as I posted on a discussion the other day: “Power and creating a base becomes more important than ethical considerations… and anti-Semitism is certainly swept under the rug more than anything else. I would caution all of us, however, to make sure we use these views on both sides. While PT is probably not an anti-Semite, it was beneficial for him to court the alt-right who clearly is… and clearly his rhetoric has unleashed a wave of anti-Semitism, as well as incidents against other minorities. And B, who does trouble me greatly, has made millions and millions by doing the same… courting those on the alt-right who have strong nationalistic and anti-Semitic tendencies. He also may or may not be an anti-Semite… but building a personal fortune from those who are makes you beholden to them for your livelihood and is a very dangerous and not well-played game.”

Getting elected at any cost has its price… and that price will ALWAYS be paid… sooner or later.

But as I said, I want to call things as I see them… and the Far Left is just as much at fault.

Being anti-Israel is seen as the social justice call of our times… Too many misguided kids get suckered into this notion and wind up fighting the wrong battle. They join the ranks of the BDS, thinking they are doing something righteous, when in fact, they are denying history and fact and actually supporting anti-Semitism.

Where BDS goes, so goes violence and anti-Semitism and it has been proven over and over again. Being ANTI something is a huge statement… and while I used to believe that one could be anti-Israel without being anti-Semitic, I am starting to see that it just doesn’t wash.

If you want to discuss and criticize Israel, fine… but don’t be ANTI-ISRAEL.  And that does NOT mean we should not hold Israel accountable, nor does it mean she is perfect… but we need to recognize and make sure our “friends” and others recognize, that Israel is the ONLY Jewish state in the world and has every right and need to exist as such.

I was a supporter of Black Lives Matter, until they released a statement condemning Israel. What did this have to do with their cause or purpose? Why in the midst of their own struggles, did they have to take the time and energy to come out against Israel?

If anyone understands the struggles of African-Americans, it is Jews. How many Jews in the ’60s fought on the front lines for Civil Rights???

A friend of mine’s son was distraught when groups on his college campus wrote a letter declaring unity in the face of the violence and hate speech being directed against minorities… He was distraught because the letter and groups purposely failed to include Jews. His articulate and passionate response was amazing. But this is happening all over the place… Liberal groups and causes are standing up for everyone… EXCEPT JEWS AND ISRAEL!!!

Anti-Semitism does not belong to one party, or one side of the political spectrum… it is a disgusting, fearful, misguided dangerous hate that comes from many shapes and sizes. Silence is not an option.

To quote Lord Rabbi Jonathan Sacks: “The hate that begins with Jews, never ends with Jews.” 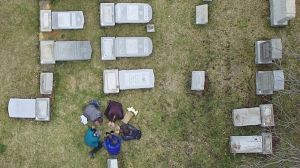 I would like to end with some thoughts far deeper and wise than my own… Two speeches by Rabbi Lord Jonathan Sacks that are vital, essential and imperative viewing…

And I will leave you with some hope… It is important to mention that some Muslim groups are helping raise funds to repair the cemeteries in St. Louis and Philadelphia. This is a great and promising sign that our two communities can actually come together and support each other!

But the key for us is clear… Be strong, be vigilant, stand up and speak out for all injustice, all prejudice, all racism and anti-Semitism… WHEREVER we see it.

2 responses to “Never Again Is Now – By Marc”