I’ve worked in restaurants on and off since college. The job can be tremendously stressful, hectic, and in the midst of the dinner rush, can feel like war. Imagine that 3 of your tables have asked for their check (because they’ve just now told you they’re trying to make a movie in 5 minutes), one of your table’s food is ready and waiting on the line, and you’re stuck listening to an old man complain about the consistency of his potatoes and demanding his 7th refill of diet coke. How does one get through such chaos with grace, efficiency, and a smile? Teamwork.

You can be the strongest and most seasoned server at the restaurant, but sooner or later you’re going to need help. The ability to prioritize your needs, then asking someone who’s not too busy or is already going across the restaurant to pick up something you need, can make the difference between catching up or a meltdown. So when I was starting at a new place, I would make it a priority to pay special attention to the servers around me. I’d always ask if they needed something at the bar, I’d clear tables, run food, etc. And because I looked out for people, they looked out for me.

That was great until I started working at an old-timey restaurant in the valley. Both the servers and the clientele were between 50-80 years old. But there was this one server in particular, Velma (not her real name). Never in my life have I met someone who delighted so much in being mean, tearing other people down, lying to your face, then all of a sudden treat you like you’re her best friend because there was someone else working that day she hated more than you.

Why do I bring up Velma? Because unlike all the other restaurants I had worked at, if you tried to help Velma, she’d tear your head off. “Don’t you dare even look at my tables!” she’d snap. And if you asked for help? She’d run to the owners and tell them you couldn’t handle the job, then she’d take your tables. Needless to say, emotionally this was not a good place to work.

So what does this have to do with Torah? 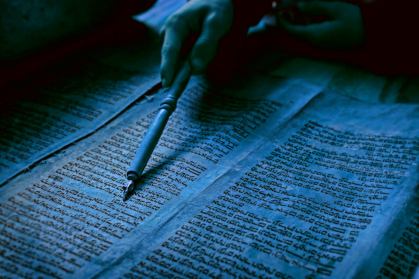 Next week is Shavuos, the holiday which celebrates the receiving of the Torah at Mt. Sinai. Not only did we get the Torah, but God revealed Himself to a degree that has never been seen since. The whole nation witnessed a transcendent miracle and heard the voice of God for themselves. It’s the most important moment in human history and oddly is one of the lesser known Jewish holidays.

There’s plenty to learn about the holiday. In fact the way you celebrate it is by staying up all night and learning as much as possible. But in reviewing the holiday I noticed something which prompted me to share my restaurant experiences above.

The Torah portion where the revelation happens is named parshas Yisro. But it doesn’t start out with the big event, it starts with Moses’s father-in-law. Yisro arrives at Sinai to find Moses giving each and every person individual attention and advice from morning until night. When Yisro sees this he says;

“What you are doing is not good. You are going to wear yourself out, you too and this people that is with you. This is too heavy for you. You cannot do it alone.”
(Shemos 18:17-18)

From this, Yisro recommends a hierarchal system of judges (basically the first bureaucracy and teacher’s assistants) and Moses accepts. It is debated whether this was a good decision or a bad decision by many commentators. (Losing the opportunity to have your problems answered by Moses himself!) And maybe for Moses, he shouldn’t have agreed to it. But the moment is in the Torah and the Torah is meant for us to learn from. So it is clear to me that the Torah is telling us that we shouldn’t try to take on too much and that it is essential to ask for help when we need it.

But why before Shavuos?

Rabbis understand that parts of the Torah are out of chronological order and one such instance is this very moment. Some commentators interpret the opening line “Yisro heard…about all that God had done” to include the revelation of Sinai. If that’s the case, there’s the question of why? What do we gain by switching the order of events?

The answer (which I learned from the amazing Rabbi Jawary) is that one of the things you need in order to receive the Torah, its wisdom, and ultimately an enlightened relationship with God is humility.

Humility is often confused with weakness. It’s not. Humility comes from knowing what you are capable of and knowing what is beyond you. It’s when someone lacks this self awareness that they can be desperate to prove themselves to others. Someone with humility is capable of learning from everyone. Someone without humility can’t learn from anyone because they are sure they are right and believe they have already figured everything out.

Asking for help can feel like an admission of failure (as Velma liked to trumpet). But it isn’t. It is one of the strongest demonstrations of humility. We are limited and flawed beings and we should recognize that. It is only from that recognition that we can grow. And that is why humility is essential to achieve before being able to receive the Torah. The word Torah means instructions. If you’ve got it all figured out, what do you need the instructions for? Also the Torah is a dense and complex document. It’s not meant to be studied alone. You’re supposed to learn the insights from a teacher or with a study partner (aka chevrusa). And you’re not supposed to live it alone, but with a community. People who are invested in your well being.

So in all parts of your life, always remember that you’re not alone, humility is about recognizing your limitations as much as it is about owning your strengths, and that even Moses needed help once in a while.

This blog post is dedicated to the refuah shlema of Yehoshua Meir ben Leah Sara and Nosson Yitchak ben Devorah.

One response to “Shavuos – Letting Yourself Ask for Help — By Ben”