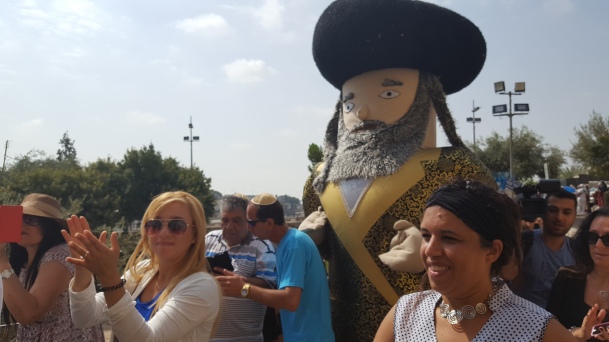 It’s hard to believe I’ve been in Israel for 3 weeks and the first leg of my trip is already over. I’ve been at a yeshiva known as Machon Shlomo studying in their summer STEP program. The first section finished today and to end it we all had to do presentations on a mishnehs from Pirkei Avos. So I thought I’d put mine up here as my weekly post.

Great, sounds pretty straight forward. Honor your student, revere your friend, and have a lot of reverence for you teacher. Nothing really surprising there. So what’s really going on?

Staring with the student, the operative word is כבוד. The translation says it means honor, but it would also be translated as respect. Sure, I guess it’s a good idea to respect your student, but isn’t it better to have them respect you?

The later part of the mishneh seems to think so. There it uses the word, מורא which we see translated as reverence. But a more exact translation is fear. So you’re supposed to have your student scared of you while you respect them? In theory I guess that could work, but in my experience the teachers who I have been scared of didn’t seem to have a lot of respect for me.

So which is the misheh saying our teacher/student relationship is supposed to be like: This?

I’ve heard time and time again about children who grew up observant and fell off the path because somewhere along the line, a teacher or a rabbi disenfranchised them. I personally know several people who shared that when they started to question the whys and the reasons for the litany of mitzvahs and blessings they had to perform and recite every day they, they were told to “just do it.” Feeling that your teacher believes in you makes the world of difference in whether a student is willing and able to learn. How does a teacher accomplish this?

The key is in the word חביב which means dear or favored. What the mishneh is getting at is the difference between educating vs showing how much you know. Unfortunately, all too often a teacher makes the act of teaching about themselves rather than making a genuine connection with the student. But as one of my teachers (Rabbi Ron Jawary) recently told me, “If your students don’t know how much you care, they won’t care how much you know.”

In Rambam’s Mishneh Torah section on teaching Torah, he goes on for a whole chapter about how a student must always stand in the presence of their Rabbi, they must never talk before him, in some cases you’re not even allowed to address your rabbi directly with a question, you have to ask the assistant. So yes, Judaism does put a big emphasis on respecting our teachers. But fear them like Heaven (meaning like God)?

There a discussion in the Talmud about the word את (es). Now את is funny, it doesn’t have an English translation per se. Many times it’s used like a super version of the adjective, the. ( את הארץ The Earth ). The ה acts as the article adjective, but את makes it THE earth. But there’s also a teaching in the Talumdic book of Sanhedrin that says, when you com across את in the Torah, it is also an indication that there’s a secret lesson (or a drash) to be learned. One Rabbi went through the whole Torah discovering those drashim, until he got stuck. The line he got stuck on says “You should fear Hashem your God.” But before the quote there’s an את, and that את would imply that you’re supposed to fear something else the way you fear Hashem. But what could you possibly fear the way you fear Hashem? Such a comparison would almost be blasphemous. The Rabbi was about to give up when the commentary comes along and says, one’s teacher.

The person who puts you in touch with Heaven, who teaches you and brings you to know Hashem, that person you can fear like God. Because that’s how you come to fear God in the first place. Also as you’re supposed to honor a king’s emissary the way you would honor the king, so too should you treat a Rabbi with the awe you’d have for the God he represents.

Then we have the friend who the mishneh sets between these two concepts; כבוד and מורא. Conventional wisdom would suggest we should honor our friends, but the mishneh is saying we should fear them!

What the mishneh is getting at is the way we view our friendships. In theory we could see as equals, but in reality that’s rarely the case. By comparing the relationship with כבוד and מורא, the mishneh is pointing out that we are likely to treat our friends as students (people who we are more than happy to dispense advice to but rarely consider their recommendations) or as teachers (people we regard highly and always respect their opinions.) Then it advises us to choose the latter. As mishneh 4:1 states; Who is wise? One who learns from everyone.

Bringing It All Together

Mishnah 4:6 says that one who learns for the sake of teaching is given the opportunity to study and teach. Teachers have said time and time again that they learn more from teaching than they do from their own learning. Students connect us to our Torah learning. They make it real.

The friend — There’s a story in the Talmud in Ta’anis about a man named Choni. Long story short, Choni falls asleep for 70 years. When he wakes up everyone he knows is dead and he’s all alone. So he prayed,  “או חכרותא או מיתותא.” Either give me a friend or give me death. A friend connects you to the ability to experience life.

Finally for our teacher, we’ve already established that they connect you to the God. But that connection to God is your connection to life in the world to come, the most important connection of all.

So when regarding these three relationships in your life, if you give them the proper honor and reverence they deserve, you will find yourself connected to your life on a whole new level.

2 responses to “Students, Friends, and Teachers. Who to Fear and Who to Respect. — By Ben”