After almost 6 weeks in Jerusalem my time at Machon Shlomo is coming to an end. Yet I’m not heading back to the states just yet. No, just switching yeshivas to Shapell’s. But much like at the end of the first section of Machon Shlomo’s summer program I did a presentation on Pirkei Avos, so to am I doing one for this leg. Here we go! 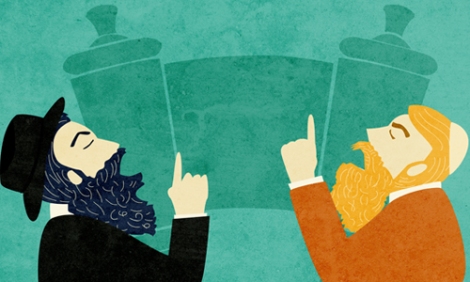 Rabbi Hillel says: Don’t separate yourself from the community, don’t trust in yourself until the day you die, don’t judge your fellow until you’ve reached their place, don’t say words that are impossible to hear, in then end they will be heard, and don’t say when I am free I will study, perhaps you will not ever be free.

1. אל תפרוש מן הצבור — Don’t separate yourself from the community.

We are are living in a world that is losing the notion of community. As we move to more densely populated cities and cultivate our social media networks, our close connections are shrinking. According to a sociology study at Duke University Americans have fewer confidants, people they can confide in about personal matters, than ever. So Hillel is imploring that one do what is necessary to make sure such a divide doesn’t happen. But what can one do when most next door neighbors hardly know each others’ names anymore? It all starts with where you choose your community. Most people choose where they live based on how much a house or apartment costs, how close it is to work, maybe the view. The community is secondary or even tertiary. But if the community is at the forefront of the decision, with questions like, do these people hold my values, do they enjoy what I enjoy, are these people who will help me grow, then the level of  connection is almost guaranteed.

Don’t trust in yourself? Wow, that’s depressing. And till the day you die! All the more so. But what this section is getting to is the idea that our yetzer hara (our weaknesses, our bad inclinations) never lets up. Just when you think you’ve mastered a problem, it’s going to come at you with a bazooka. So don’t let up yourself.

I’m sure you’ve heard, “don’t judge a man until you’ve walked a mile in his shoes.” Well where do you think they got it from? Judaism stressed that you never judge a person. However it doesn’t ban all judgement. What can you judge? Actions. We must have an awareness of what is right and what is wrong and be able to see it. But the person we do not judge. For example, let’s say you see a car speeding down a residential street at 80 miles an hour, running every stop sign. Are they a reckless driver? Not for us to say. Are they driving recklessly? Absolutely. The driving is certainly dangerous. We just don’t if that driver has a friend in the back seat with a life threatening injury and every second is critical in getting them to the hospital. Judge the action not the person.

This one is probably the most cryptic. It could be about speaking Lashon Hara (speaking bad about someone). We all know the walls have ears and things get back to you. And if you think you are being clever by speaking non-descriptively or in some code, it’ll get figured out. So just don’t do it.

Priorities, priorities, priorities. When it comes to Torah study, what could be more important? Yet still, it’s often on the chopping block. That’s because there is a difference between things that are important and things that are urgent. We end up doing urgent things, but we put off important things (until they become urgent.) But Torah is never urgent, unless you have a blog post to write. So what do you do? You have to set a time. Ask anyone who is serious about something like working out. They get up at such and such time and they work out for X number of hours. It’s because they are serious about it. So if you’re serious about learning set that time and stick to it.

But what about Hillel?

As I’ve said before, all the statements in a Pirkei Avos should reflect on each other. So what is the underlying theme here? The key is in the speaker Rabbi Hillel. Hillel was known for his enduring humility. And if you look closely you can understand these statements under the lens of humility vs arrogance.

1. Separating from the community

An arrogant person who decides that being involved in the community is beneath them loses connection, but more importantly misses the opportunity to be apart of something bigger then themselves. Community allows for unity of action and friends who can give you the guidance and constructive criticism (that you’d never accept from a stranger) which makes you better. An arrogant person misses out on all of that.

2. Careful about trusting yourself

Humility comes not from thinking you are small, but from understanding your strengths and knowing your weaknesses. It’s the person who knows where they are lacking that they will always be on guard (“until the day they die”). But an arrogant person presumes they have it all figured out and are invincible. Which obviously leads to their fall.

A humble person learns from everyone. An arrogant person on the other hand is quick to point out faults. Such behavior comes from personal insecurities as a desperate attempt to bolster themselves.

4. Words that are impossible to hear

The Rambam says that this statement pertains to teachers who give over lessons cryptically. An arrogant teacher can’t be bothered to teach at the levels of their students. They assume their brilliant way of giving over the material will suffice for all. This is rarely the case and because of it, student will either be lost to the material, or worse misunderstand the lesson entirely and make terrible mistakes. But a humble teacher makes sure his/her students understand the lesson at all costs.

Finally we have the statement about studying when you have the free time. But word תאמר which was translated as study, can also mean change or grow. An arrogant person is convinced they have no need of any growth because they are perfect. Or if they do work on themselves, it’s an after thought, never putting the energy and effort necessary to make the painful and slow steps necessary to make real change.