One thing I love about living in the “shtetl” as some of my friends and family sweetly call the Jewish community that I live in, is that there are pop up celebrations at certain times in the calendar. I.e. Purim and Sukkot are some of the more obvious ones because they lend themselves to having many guests.  The open and flexible walls of the sukkah, and bringing gift baskets of wine and cheer to peoples’ doorstep on Purim etc, lend themselves easily to L’Chaim parties aka Fabrengens’.

However, Shalom Zachors for a baby boy’s first Shabbat of life, and Chanukah parties are the more surprise-y ones.  Last night I attended a Chanukah party through the Young Professionals Division of one of the shuls I frequent and it was lovely.  I was happily surprised to meet a whole gaggle of people I’ve never met before and in a real shtetl that never would happen.  LA has a big enough Jewish community that there are always new Yidden to meet in different pockets of even the same ‘chood.  At this party, I met someone who told me about another house party happening down the street and on a whim decided to go.  I’m allowing 5778 to be a Year of Yes and so far its worked out splendidly Thank G-d.  I was blown away by the beauty, magic, and warmth I felt in the second party.  Maybe its because I didn’t expect to go to another party on a week night and only arriving at 10:30PM.  Maybe its because I was so excited to surprisingly see some sweet friends of mine who I hadn’t seen in a while.  Or maybe it was just because of the following amazing words of Torah I learned in the room.

I share these with you from the best of my memory and unfortunately don’t know the source of where the speaker got his Torah and all I know is his first name, Shmuel, so thank you Shmuel!

Shmuel had just gotten back from a healers’ retreat where he worked with people suffering from PTSD.  From the moment he spoke I could tell he was on a very connected high level of consciousness.  I could also tell that it took a lot of energy for him to take a breath in between some of his words.  Not because he himself was uncomfortable.  He seemed very much at peace in his own skin. I just noticed in him the way I notice within myself when I lead my own Mindfulness Classes that it takes some time for the listeners to sometimes become more present and fill into the room.  Our attention is so split nowadays and it takes time to get off of the hamster wheel even when we’re at a party and enjoying libations as it were.

Here’s what he said once he felt heard enough in the magical room…again I’m transcribing from my memory:

When a baby is born in the world the way that it regulates itself to the world is by focusing and connecting with another person with their eyes.  As we get older the world can be a dark place where people want to be anything but connected.  We can sometimes experience shame for wanting to connect deeply with others. Once a baby/young person continually gets shamed or is rejected for wanting to connect with others s/he can start to learn how to build up walls and find other ways sometimes more destructive ways to connect to itself and to others.

Eventually, they will create a hard shell, at least on the outside, to protect the inner light that it once so easily wanted to share with an other.

At this point I could feel tears rolling out of my eyes. I thought of my baby neice and how vulnerable she is and how easily she connects to others with such a softness.  Her eyes share such completely unfettered innocence and an eagerness to connect to anyone who crosses her path.  Then I thought of myself when I was a toddler and how in pictures I can see I was once like that and to a large extent I still am.  I was once voted amongst my friends the person “Most likely to talk to anybody in the street”.  However, after being bullied in middle school for being so open, then later being rejected so many times in the theatre and TV world, and furthermore, going on date after date in the Jewish dating world, man I have learned to shut down some of that vulnerability just to survive. My innocence is not the same.

Shmuel then invited us all to look to the Chanukiah and connect to the Chanukah candles for just one minute without talking.  He invited us to allow the soft beautifully burning light to soften our gaze. He then said to take that gaze from the candles into softly connecting with everyone else in the room.  He asked us to turn to the people around us and without using our words just softly gaze into one another like we each had a candle burning brightly inside of each of us.

Afterwards, Moshe, the host, shared that he that morning had been learning the Jewish laws of speech.  He said that the bottom line in order for us all to stop speaking badly about each other is to continuously learn how to let go of our ego and judging others, and forgive.  He said that ultimately G-d wants us to treat others the way that we want G-d to treat us, with such extreme forgiving.  I’m sure you’ve heard that thought many times. Me too. “Treat others the way we wanna be treated.” Nothing new there. But ya ever hear the saying “Sometimes you have to learn Torah several times before it really sinks in?” Well at that moment coupled with the Candle Exercise I somehow heard it for the first time in a new way.

Maybe if we can soften our physical gaze when we look at each other then it can translate to how we think of one another and we can forgive more easily.   The Host went on to say, “We need other people for the light and love they can add to our lives.  We can do a lot on our own but we cannot do all of it on our own.  We need others to help us.  And others need us to heal as well.”

This made me think of how just this week a friend of mine who has been stuck at home because of an injury said to me, “Just hearing you say that you believe in me and that I’ll get better is way more potent to me than all of my hours of therapy.”

And it hit me, “How many people nowadays are spending more time in therapy trying to get “fixed” over making real genuine space for intimacy with their close friends or family?  Have we become such compartmentalized capitalistic accomplishment machines that we are paying people to listen to our hearts vs just opening up to our close friends?

He also went on to say, “One of the Laws of Loshon Hora (not speaking gossip) is that ‘If a person is rude to you and won’t give you something that you asked for, you shouldn’t hold it against him later on if he asks something of you.”  This is a big one I hear from people sometimes:  “I told so and so, not only am I not going to give you something because you didn’t give to me when I was in need but I’m no longer speaking to you either.”  How far can we possibly get being so selfish? Not speaking to another person just because they asked something of us and forgot that they once were selfish towards us.  Isn’t that just repeating the cycle?

According to the Maccabees who won the war on Chanukah for us, fighting for Jewish Freedom and whom we stand on the shoulders of today, Thank G-d, we have to sacrifice for others who can’t always give to us. According to our great Sages of the Talmud, G-d wants us to look at everyone with the most loving compassionate eyes and not hold anger and not hold a grudge.

In this very parsha (Mikeitz) this week, wherein Jacob releases his judgement and receives his brothers kindly after Yehuda assumes full responsibility of his part in hurting him.  If I had a mission statement attached to me it would be “Don’t harbor hate towards an other on your heart.  Forgiveness is the only way we can move forward.”

I feel like with these two Torahs should bring a lot of light to the world and if every person knew them maybe we could see the Moshiach officially this Shabbat. 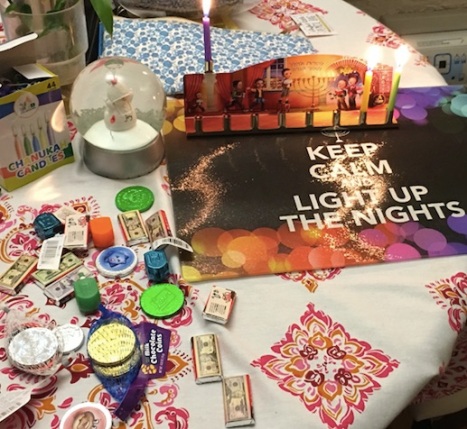 Happy Chanukah to all and to all a great night! May we all always look for the miracles not just at Chanukah but always,