Growing up, Purim was a super fun holiday that involved costumes, noise makers and Hamentashen. Because my family was one of those twice a year Jews… Yes, I had a Bar Mitzvah and went to Hebrew School… I did not give the holiday as much thought as I have as an adult. 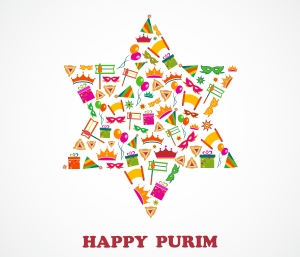 As I ponder Purim, I find it both fascinating and frustrating, hidden and revealed. And, of course, these are the essential ideas behind the story of Esther.

While Hashem is not mentioned at all in the Megillah, it is clear that He is always present and always there, which of course, at least for me, leads to the question of Free Will. If G-d is in fact orchestrating all of this, isn’t it G-d who is controlling the outcome? I suppose it is POSSIBLE that Esther and Mordechai and everyone else might not have done what they were supposed to do… So did Hashem pick them specifically… or simply create a situation where their Free Will lead them to the desired conclusion?

This is profound. I am still young/early and yet deep in my attempts to comprehend this on the many levels on which it operates. So much for a light and drunken holiday!

Aside from the set prayer times, and waking up with thanks and gratitude and humility, we have the opportunity to see G-d’s work throughout our day, to talk to Him and to give thanks. The key is to open our eyes and our hearts and actually do it.

The second issue that causes me frustration is that Haman is clearly evil… the antagonist… a man hell-bent on eliminating the Jews. And yet he appears, in one form or another, over and over and over. Many have said he is Amalek… a truly destructive and evil source we have also seen over and over.

Amalek is “a son of Esau’s first-born son Eliphaz and of the concubine Timna, the daughter of Seir, the Horite, and sister of Lotan.” The Amaleks were the first “enemy that Israel encountered after the crossing of the Sea of Reeds.”

Many have said that Hitler was Amalek… and as a proxy war seems to be turning into direct conflict with Iran and Syria, it is possible to view one or both of them as a contemporary Amalek to the Jews and Israel.

Have we not evolved to the point where there is not some evil mastermind trying to erase the Jews from the face of the Earth??? Why does it keep happening again and again and again? Why does G-d remain hidden, when it seems we need Him now more than ever? Where are the miracles we want and maybe NEED to see?

My friend, Rabbi Shlomo Seidenfeld puts the holiday in amazing perspective, combining these two thought-provoking ideas. He teaches “that although miracles may powerfully demonstrate G-d, they don’t create a relationship with G-d! Only when a people or an individual believes that G-d is eternally and internally present in their lives, is a relationship created.”

He continues to say that miracles are not enough! “They don’t reassure us, they don’t comfort us and they don’t nurture our faith.”

We do have Free Will and we must face the world knowing this… but also knowing with absolute certainty (not always easy, for sure) that Hashem is always around us… Hashem is always guiding us… protecting us… and moving us closer to meaning and destiny.

Have an easy and meaningful Fast tomorrow, and then have a joyous and celebratory Purim. Breathe deep and take all of G-d’s miracles in. They are often hidden, true, and yet, they are also often right in front of our eyes and our hearts.